On Monday, May 23, three Nassau County graduating seniors joined world-class musicians onstage at Lincoln Center for an ensemble performance that’s been years in the making.

In many ways, their performance at Alice Tully Hall signified not only their accomplishments as musicians but also the students’ dedication to promoting meaningful, accessible music education for other Long Island youth like themselves.

In the days preceding their performance (which featured lively and challenging selections from Mozart, Beethoven, Dvorák, Prokofiev, and Tchaikovsky), all three students as well as Dr. Yeou-Cheng Ma, Executive Director of COS, spoke to Nassau Illustrated News about their many accomplishments, obstacles overcome, and hopes for the future.

Dr. Ma, a world-renowned performer as well as an accomplished pediatric neurologist, was thrilled at the opportunity to highlight students’ hard work and superior accomplishments as musicians but also their warmth and, frankly, their immediately apparent emotional maturity as community members. (As the older sister of renowned cellist Yo-Yo Ma, and the daughter of COS’ founder, Dr. Hiao Tsiun Ma, it can often be difficult to get press to focus on the children themselves, she explained).

The orchestra, composed of multiple ensembles based on skill level but open to all, is also a seemingly unique form of educational and creative institution for young people. Dr. Ma explained that her experience as a clinician, as a lifelong performer, and working alongisde her husband (COS Musicial Director Michael Dadap) and partners such as Kolstein Music have allowed the pair to develop a learning atmosphere where pedagogy is fitted to each child, not the other way around.

“I use music in my medical practice to calm kids,” Dr. Ma said. “If they’re scared, I ask them to sing for me, or sing with me, and then they’re not scared as much. I use what I’ve learned in medicine about temperment and learning styles and developmental stages to help me teach kids at a level that works for them, you know? I teach them at whatever level they happen to be in rather than force the issue. It’s what we call a child-centered approach.”

When it comes to music, she said, “Kids are motivated by different things. So some like to have a little reward at the end of the lesson, or a snack, or a star, and we maximize whatever works for them to help them progress.”

In some ways, perhaps, that’s especially been true during the COVID-19 pandemic, as COS participants have had to forego playing together whatsoever (even online, ‘til techonology improves), and found themselves on early-career solo paths, so to speak.

Joshua Wang, who’s been playing violin about ten years and spent many of those in COS and other youth ensembles, said that one of the highlights of his ‘COVID years’ was experimenting with playing and composing different kinds of music. He also started exploring home recording methods for the first time. Between online instruction from COS and projects he did on his own, Wang said, he found himself developing a love for bluegrass music, and even finding success and inspiration using household items like bowls and drawers to create new sounds.

Julian Chang also commented that he had the chance to learn about new ways of playing and recording music during the pandemic once it became clear that it was “pretty much impossible” to rehearse together over Zoom. Before long, orchestra members were recording audio and video segments of them playing their pieces on their own, except for a metronome; these were then “stitched together” to create a group performance, Chang explained. “That was actually a pretty fun experience.”

Andrew Arloro, who spoke to Nassau Illustrated from his back porch, also admitted that he’d missed hearing the way orchestras sound together in a performance hall (really any performance hall, and he’s played in many of the region’s best). Like his orchestra-mates, however, Arloro seemed generally quite upbeat about his past few years, which included a live performance tour of China with COS during which he realized, just before his final performance, that he’d left his dress pants in the previous city. Like Wang and Chang,

Arloro also praised the kind of multifaceted richness that music has given his life, whether through socializing, self-expression, or feeling of “warmth” that playing a french horn can provide.

“Many authors have associated music with being more than just sound,” Arloro continued. He cited the opening of J.R.R. Tolkien’s The Lord of the Rings series with its opening hail in Tolkien’s Elvish language to the music of the universe, and how Aslan the Lion in C.S. Lewis’ The Chronicles of Narnia books sang that world into existence. “The world is music, and it’s alive with music.”

After nearly two years with little-to-no group performance in their lives, both the youth and adults of COS seem understandably energized by getting back on stage more this spring and summer. But while many aspects of the pandemic that have limited live music may be going away somewhat, the orchestra is still catching up from another kind of major setback.

In September 2021, near the end of Hurricane Ida, “We had a terrible flood, and six feet of water in our basement,” Dr. Ma said. Dozens of instruments, including two grand pianos, and huge stores of recorded and sheet music were destroyed when the water swept in. All told, she said, the orchestra incurred about half a million dollars in damages that were not covered by their insurance.

The COS board of directors has agreed to match donations to the orchestra through June 30, and Dr. Ma is hopeful that her team, which includes numerous COS alumni, will soon have its tools and its performance schedule back in tune before long.

Dr. Ma said that donations of instruments in good condition are always welcome, too. 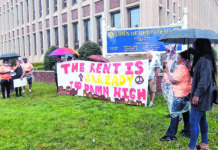 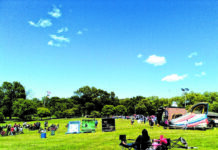