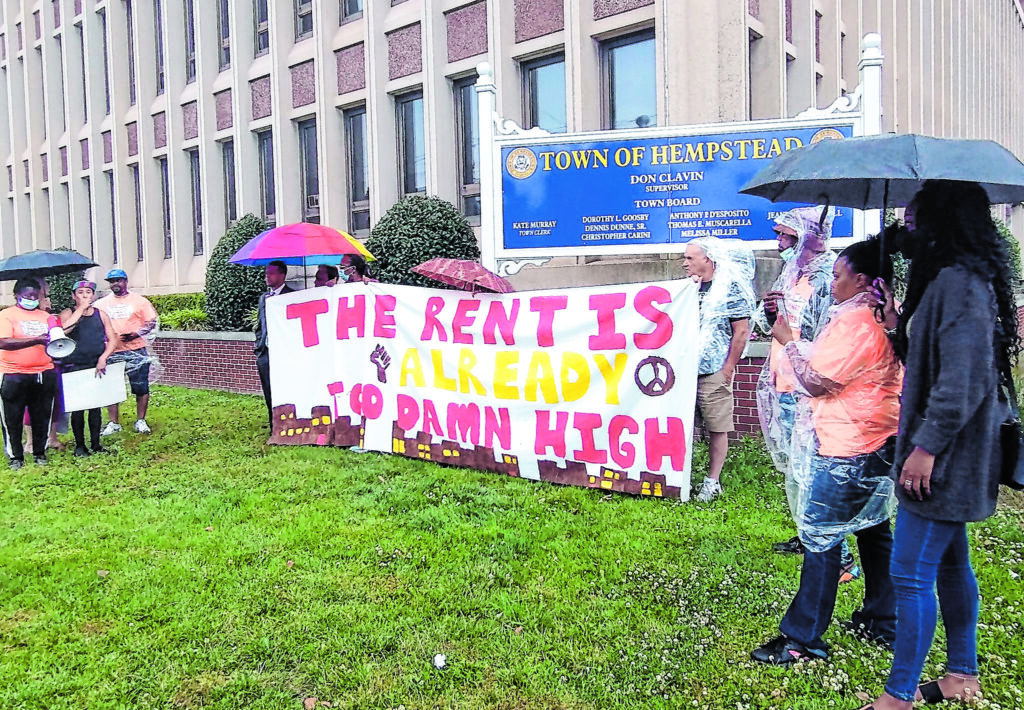 “It is unconscionable that amid an affordable housing crisis, a pandemic and the growing prospect of an economic recession the Nassau County Rent Guidelines Board would vote to hike rent on families already living paycheck-to-paycheck. Let’s be clear, this is an attack on working families, and Black and Brown community members living on this incredibly segregated island will be most impacted by the Board’s disastrous decision. The folks who voted for this rent increase need to answer for why they chose to put landlords’ profits over peoples’ lives. Our message to landlords: if you’re struggling – but you’re likely doing just fine – go out and get multiple jobs like the rest of us, instead of squeezing every cent possible out of your tenants.”

Ahead of the Board’s decision to approve rent increases for one- and two-year leases beginning on or between October 1, 2022, and September 30, 2023, Nassau residents rallied at Hempstead Town Hall against the expected approval of higher allowable rental increases while a pre-vote informational and testimonal RGB session was held in Hempstead on June 21.

“There is no middle class,” said Nia Adams to assembled renters, housing advocates, and press. “It is the wealthy against the rest of us.”

“People have lost their jobs [and all living costs] have gone up,” said Thern Shivers, a local resident and member of New York Communities for Change. “And buildings are still falling apart. No maintenance is being done.”

Shivers was also one of several speakers at a rally the week before at 100 Terrace Avenue in Hempstead, where she herself resides.

Following a shooting that left one 19-year-old man dead and three others wounded, tenants rallied outside to building to protest the fact the two side doors of the large residential building are kept locked for safety reasons per Hempstead Police and the landlord’s reasoning.

Shivers and her fellow residents gathered outside the building with New York Communities for change while a memorial for the slain 19-year-old was also being held nearby, with some residents coming and going between the two. They argued that keeping the doors locked actually prevents residents from getting safely into the building, whether because they’re escaping gunfire or merely have mobility issues.

Shivers urged those present, “Tell the mayor of the village and Detective Murphy: We will not be criminalized. You need to come and open these doors.”

With energy, food, and other essential costs on the rise, many tenants in Nassau as well as statewide are waiting anxiously to see what landlords will do as rents, and allowable rent increases, creep back up in many places. Ever since New York State’s eviction moratorium expired in January, evictions have been proceeding through state housing courts, albeit sometimes at a slower pace.

As Rachel M. Cohen noted in an article on housing insecurity and eviction for Vox this June, “Nearly 1 million people are evicted in the US each year, mostly for nonpayment of rent … [amd the] experience of losing one’s home to eviction has been linked to all sorts of adverse consequences, including higher job loss, debt, suicide, and reduced credit access.”

In addition, Cohen wrote, “Many evicted families are forced to relocate to lower-quality homes in neighborhoods with more crime, [and] children experience higher food insecurity and lower academic achievement than other low-income kids living in rental housing, partly as a result of having to shuffle between schools and their parents’ declining mental health.”

According to Trulia.com, 100 Terrace Avenue, also known as Jackson Terrace, was sold to its current owner in early 2007 for $27.5 million. According to PropertyShark.com, the property was also sold less than two weeks before that, in late 2006, for $1.