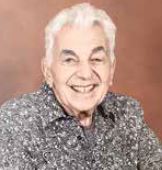 He was a retired pediatric and adult allergist who practiced in New York City and Long Island for 30-plus-years.

He was born in Binghamton, NY on December 30, 1930 to Eleanor and Albert Wolfe. He received a BA from the University of Pennsylvania and an MD from New York State Medical University at Syracuse. He also spent two years as captain in medical care in the US Army.

He retired in 1991, moved to Boca Pointe Country Club and developed a passion for bridge, attaining the rank of Gold Life Master. He played on Boca Pointe Tennis Team, winning several titles in men’s and mixed doubles competition.

Funeral services were held on Wednesday, February 16 at Star of David Memorial Gardens 7701 Bailey Road, North Lauderdale. In lieu of flowers, the family asks that you consider donations to the American Heart Association.

—Submitted by the family of Dr. Harvey Wolfe