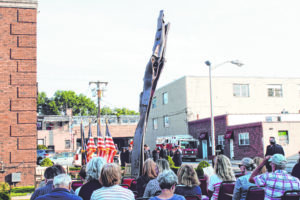 It’s hard to imagine that the September 11th terrorist attacks happened 20 years ago. In honor of the attacks on the World Trade Center and the Pentagon, and for those who sacrificed their lives to help save others, villages and towns across Nassau County are coming together to hold memorial ceremonies.

Dozens of attendees are expected to join the Village of Manorhaven Mayor Jim Avena, the trustees and staff for a full 9/11 ceremony. Members of the clergy will lead the audience in prayer, select speakers will say a few words and Veterans will provide a gun salute. In addition to conducting this memorable service, the village has installed a 9/11 Memorial Garden, a monument honoring Port Washington residents who died on September 11, 2001, a memorial inside the courtroom and another monument that features a section of a steel girder from the World Trade Center. The ceremony will begin at 10 a.m.

The Village of Mineola will be holding its annual 9/11 Remembrance Ceremony on Friday, Sept. 10 at 7 p.m. in Memorial Park, which is located at 195 Marcellus Rd. All residents are welcome to attend.

Chief Devyn Moody and the officers and members of the Garden City Volunteer Fire Department would like to invite all residents to join the department for its annual 9/11 Remembrance Ceremony at the Village 9/11 Memorial located at the village green and gazebo at the corner of Hilton and Stewart avenues. The remembrance service will be held Saturday, Sept. 11 at 8:30 a.m. The service pays tribute to the 23 Garden City residents that perished during the attack on the World Trade Center, the 343 members of the FDNY, 23 members of the NYPD and 37 members of the PAPD killed, as well as those who have died of 9/11-related illnesses.

The Village of Floral Park will be holding its annual 9/11 memorial service at 8:30 a.m. on Sept. 11 at the Relic Memorial in front of Village Hall, which is located at 1 Floral Blvd.

The Carle Place American Legion will hold its annual 9/11 service on Saturday, Sept. 11 at 11 a.m., at the Carle Place Veterans Memorial Park, located at the corner of Westbury Avenue and Carle Road. All are welcome.

The Westbury Fire Department will hold its annual 9/11 ceremony on Saturday, Sept. 11 at 10 a.m. at Station 2, Old Country Road.

Catholic Cemeteries of Long Island is holding a remembrance Mass for families of victims, first responders and Ground Zero workers as part of the 20th year remembrance of the September 11th 2001 Terrorist Attacks on America. The Mass will be led by Bishop John O. Barres, of the Diocese of Rockville Centre and will be held outside at the Cemetery of the Holy Rood’s 9/11 Memorial in Westbury, and will take place on Saturday, Sept. 11 beginning at 1 p.m. Attendees are asked to arrive by 12:30 p.m. Family members and the public are welcome and encouraged to attend.

In recognition of the 20th anniversary of 9/11, City of Glen Cove Mayor Tim Tenke will host a solemn ceremony on Saturday, Sept. 11 at noon at Morgan Memorial Park in Glen Cove. Tenke will be joined by local dignitaries, clergy, guest speakers, musicians, veterans, the Glen Cove Police Department, the Glen Cove Volunteer Fire Department, Auxiliary Police, Harbor Patrol, EMS and members of the Glen Cove community who lost a loved one that fateful day.

On Sept. 9 at 7 p.m. at TOBAY Beach, the Town of Oyster Bay will host a Remembrance Ceremony for the victims of the Sept. 11, 2001 attacks. A 9/11 light tribute will illuminate the skies along the shoreline in memory of those lost that tragic September morning. At the ceremony, the town will unveil new names inscribed on the Walls of Honor that recently lost their battle with 9/11 illness caused by exposure at Ground Zero. The Sept. 9 ceremony will include bagpipe music, religious readings and remarks by the family members of victims.

On Saturday, Sept. 11, the Town of North Hempstead will host a 9/11 Memorial Service at 8:15 a.m. at Manhasset Valley Park, located on East Shore Road and Northern Boulevard. All are welcome to the ceremony. This year marks the 20th anniversary of the Sept. 11 attacks and the town will be honoring the victims, their families and first responders by unveiling a monument that features a 19-foot-long beam from the World Trade Center.

On Saturday, September 11 at 8:30 a.m., Mayor Daniel Pearl and the Massapequa Park Village Board of Trustees will hold an unveiling and remembrance ceremony to honor and remember all those we have lost and continue to lose, because of the terrorist attacks to the country on September 11, 2001. The event will take place in front of Village Hall, 151 Front St. in Massapequa Park.

The Hicksville Fire Department will commemorate the somber anniversary on Saturday, September 11, at the Strong Street Fire Station memorial. The memorial was erected in memory of Ex-Chief Terrence Farrell and Honorary Chief George Howard, both who lost their lives while performing rescue efforts on September 11, 2001. The ceremonies start promptly at 9:45 a.m. with a presentation of colors under the American Flag detail by its Hook and Ladder apparatus and feature remembrances and prayers offered for the departed by Pastor Rev. Jamie Aguilera. The ceremonies generally last about 45 minutes and again this year the department will feature a special remembrance in memory of those Hicksville residents that perished that fateful day. Additionally, there will be two pauses during the ceremony, one at 10:03 and the other at 10:28 a.m. These two pauses will signify the collapse of the North and South Towers of the World Trade Center. The Hicksville Fire Department invites the families of those who once called Hicksville home to participate in the program. If any family members are interested, they should contact Chairperson Karl Schweitzer at 631-404-7791.