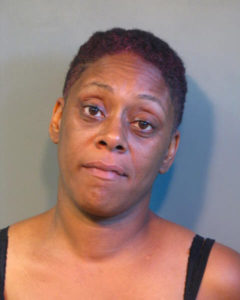 According to detectives, officers responded to a residential apartment building located on Broadway for a disturbance. Upon their arrival, officers discovered that Pettway was involved in a dispute with her neighbor. Pettway became enraged and threatened to kill her. The female victim, 51, then called police fearing for her safety.

Pettway was irate and violent towards the responding officers, throwing items out of her apartment, refusing to come outside and speak with police. The officers at the scene immediately requested assistance from the Emergency Services Unit (ESU). While ESU officers were attempting to speak with Pettway at the door to the apartment, an officer placed his plastic protection shield in the doorway to prevent her from closing the door. Pettway began pulling on the officer’s shield in an effort to take it away. She then grabbed his forearm and bit him, causing substantial pain which resulted in a contusion and swelling.

At this time, police were able to enter the apartment and Pettway refused to comply with multiple verbal commands and actively resisted arrest. After a brief struggle, she was placed in custody.

The injured officer was transported to a local hospital for medical treatment.

Pettway has been charged with assault in the second degree, menacing in the third degree, attempted grand larceny in the fourth degree and resisting arrest. She was arraigned in Mineola on Thursday, July 15.