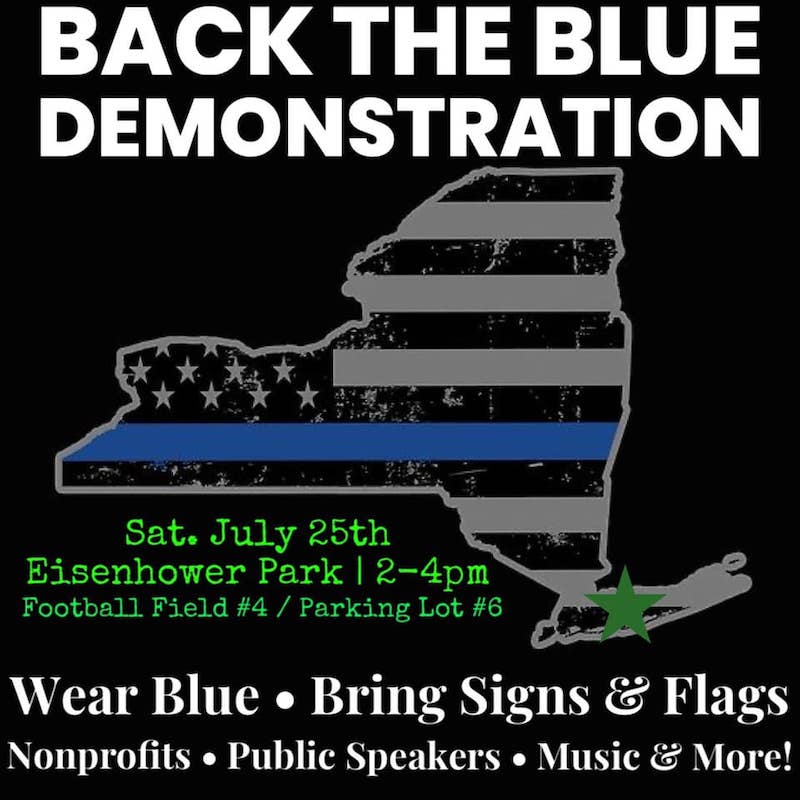 Rocker Ted Nugent will be not be singing the National Anthem at a pro-police rally in Eisenhower Park in East Meadow on July 25.

The Texas-based singer, known for his outspoken right wing views and support of President Donald Trump, was invited to the Back the Blue Demonstration by the non-profit Law Enforcement Officers Weekend.

Extremely disappointed that Ted Nugent, a man with a history of hate-filled speech, is invited to attend Saturday’s rally in Nassau. Our police department is the finest in the country and our officers deserve admiration in a setting that we can all be proud of. There is no room for bigotry or bias, of any kind, in Nassau County—not from Ted Nugent or anyone else.

On July 24, citing New York State’s quarantine orders and Nassau County’s protest protocols, Curran stated that Nugent would not be taking part in the rally. In a statement, Curran said:

Nassau County will continue to protect our residents’ right to safe, peaceful protest as is guaranteed under the First Amendment of our Constitution. However, we won’t tolerate blatant violations of the governor’s quarantine order for travelers from high-risk states, which is designed to protect the health and safety of Long Islanders.

On July 24, the Nassau County PBA, in a statement, noted that the rally was organized by “independent, outside individuals,” and neither the Nassau PBA nor any other PBA had organized or sponsored the rally.

Like many who support our police and are offended by the violence and hateful, anti-police rhetoric engaged in by some in our society, we were pleased that private citizens acted to demonstrate their support for our officers.

It has come to our attention that Ted Nugent, who was invited by the organizers of the event to sing the National Anthem, has a long history of making hurtful and hateful comments, and has beliefs that are not consistent with those held by our association and our members. We do not and will not condone his remarks and views, and have advised the event’s organizers that we will not participate in or support any rally that he attends. Mr. Nugent does not represent the sentiments held by countless Nassau County residents who support law enforcement while many sit idly by, or even act against us.

We understand there is concern about Mr. Ted Nugent singing the national anthem at this event. The Suffolk County PBA was invited as a guest to show our support for law enforcement. Mr. Nugent’s views are not representative of our organization and we certainly do not condone his many distasteful public comments. We have since been advised Mr. Nugent will no longer be performing.

Instead of engaging in productive discussion about the violence, lawlessness, and outright anarchy faced by law enforcement in recent weeks, political opportunists have used Ted Nugent’s appearance to distract from the real issue of the war on police. In solidarity, members of the Suffolk County PBA will rally alongside our brothers and sisters in blue this weekend to stand up for law enforcement.

On its Facebook page on July 24, the Law Enforcement Officers Weekend stated that “Ted Nugent will not be performing, speaking, or otherwise participating in the pro law enforcement demonstration [July 25] at Eisenhower Park. The purpose of this demonstration is to bring people together in support of the men and women of law enforcement. While we wholeheartedly appreciate anyone who supports the men and women in blue, including Mr. Nugent, the controversy over his appearance is contrary to the objectives of the demonstration.”

In a statement later that Friday, the sponsoring group made note that “Understandably, other organizations and speakers backed out in solidarity once Ted [Nugent] and [Louisiana] Congressman [Clay] Higgins were stopped from attending by other elected officials. We support their decision in refusing to participate. However, we feel it is necessary that our voices still be heard, and we cannot under good faith for the men and women of law enforcement cancel this event. We will be there [July 25] in Eisenhower Park with other nonprofits, PBAs, politicians, public speakers and other law enforcement organizations.”

The following is from the Back the Blue Demonstration Facebook page:

Join us on Saturday, July 25 in Eisenhower Park from 2 to 4 p.m. as we meet in support and solidarity for the men and women of law enforcement.

This is NOT a counter-protest to the Black Lives Matter movement. This is a demonstration aimed directly at our politicians who want to attack the men and women of law enforcement by passing asinine legislation, defunding the police and promoting violence in our communities. Now is the time for our voices to be heard!

On site, we will have prominent law enforcement speakers, music, networking, voter registration and more. Masks and face coverings are required as per the governor’s orders where social distancing guidelines cannot be met (unless for medical exemptions).

We expect a counter-protest with an unknown amount of individuals. The Nassau County Police Department will be on site to assure an orderly and peaceful demonstration by everyone. Although you may not agree with the counter-protest, it is their right to peacefully protest against ours. No matter what they say, no matter what they do, please do not be baited into arguments with others. Show them love and compassion, offer them space to protest, respect their opinions. If you are seen or heard stating any violent commentary, you will be asked to leave.

This is a family-friendly event. Please, no alcohol.