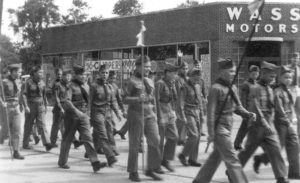 The news and the statistics are most overwhelming. Today, we are engaged in battling a global pandemic that practically no one would have imagined just months ago. As I am confronted with the numbers of reported cases and fatalities statewide and nationwide, I am seeking comfort in reaching for the calculator and seeing that, compared to the entire population, the percentages are quite minuscule.  Regrettably, each day, those percentages are becoming less and less minuscule.

With such an unprecedented crisis, it would seem unlikely that current events could conjure up any memories of the past. However, the “breaking news” has brought to my mind a couple of scenes from years ago.

In 1995, I saw the movie, Outbreak, which portrayed a horrific, mysterious infection that enveloped an entire California community. The solution seemed to waver between addressing it medically vs. incinerating the entire town. The film was definitely interesting and entertaining. However, I found the premise of such a wide-spread epidemic to be far-fetched and way beyond the limits of credibility. Oh really?

My thoughts also turned to Decoration Day (not the movie). During the 1950s, when I was a student at Corpus Christi Elementary School, there was no Memorial Day weekend. Instead, the national holiday, Decoration Day, was celebrated each year on May 30. On this day, all the students from grades three to eight would assemble in front of our school (in uniform, of course) and march from Searing Avenue over to the intersection of Third Street and Third Avenue, just south of the railroad station. In those years, the main landmarks of this area were the American Legion Hall and, stretching the length of an entire block, the Mineola Bus Terminal. It was here that we met up with the rest of the marchers and formed the real parade consisting of the Mineola Fire Department, auxiliary police, scout troops, civic associations and veterans’ groups. Patriotic music was provided by the marching bands of Mineola and Chaminade high schools and the fire department. These bands were strategically placed at various intervals along the line and we proceeded north on Mineola Boulevard, west on Jericho Turnpike, and south on Marcellus Road. The parade terminated at Memorial Park where a brief ceremony would take place–a tradition that continues to the present. I am sure that many parents noticed that we kids were unusually quiet during the afternoon following our two-mile march.

The day, of course, was created to pay tribute to those who had died in defense of our country. It was not all parades and ceremonies, however; there was an additional theme of death overshadowing the activities.

Since Decoration Day represented the unofficial beginning of the summer recreational season, the National Safety Council singled it out to raise awareness on traffic safety. Each year, for days preceding the holiday, the organization would constantly alert us of their projected amount of the day’s nationwide highway fatalities, a typical number being 325. As with a similar campaign on Labor Day, this ominous theme would dominate all newspaper and broadcasting outlets. One year, the TV panel game show, I’ve Got a Secret, abandoned their usual whimsical format and presented a 30-minute program entitled, “Three Hundred and Twenty-Four and YOU.” Not too whimsical.

On the day itself, a scenario unfolded similar to the one we witness today. This was the only news story as the gruesome tally began. Radio and TV programming would frequently be interrupted with reports of the updated number. I think, if President Eisenhower looked out his window and spotted Martians landing on the South Lawn, their visit would only make it to page three. The feeling was almost like that of a fund-raiser or telethon with a triumphant “I told you so” when the predicted number was reached or exceeded.

I would like to think that the Safety Council’s horror show inspired many motorists to forgo that extra beer at the barbecue and take it a little slower on the way home.  Accordingly, may whatever lesson we learn from the current barrage of tragic headlines enable us to avert a re-occurring nightmare.

As I sit here at the keyboard under self-imposed house arrest, I wish you all the best.  Be careful and be well. Hopefully, we can look forward to a parade followed by a nice, safe drive on a future Memorial Day.