William “Bill” Katsikas of Glen Cove, died on Easter Sunday, April 12, at age 86. Beloved husband of Carmen for almost 67 years. Loving father of Robert (Diane), Ellen Maruca (Joe), Lorraine Martinez (Anthony) and the Late Tino. Adored grandfather of seven. Cherished great-grandfather of five. Bill was a member of Glen Cove Special Police and a Pistol Instructor for Glen Cove Police Department. He was an avid hunter and a longtime member of Matinecock Rod and Gun Club and the Roslyn Gun Club. Bill was also a member of the Glen Cove Moose Lodge. Arrangements entrusted to Dodge-Thomas Funeral Home of Glen Cove. Private service and interment at Locust Valley Cemetery.

Ki Bong Bae “Kay” of Glen Cove, died on April 6, at age 73. Longtime owner of Kay’s Deli in Glen Cove, he was also known as the “Landing Legend” because he cared so much for the Landing neighborhood. Beloved husband of Seung Ok. Loving father of Captain Sang-Jim Bae of the G.C. Fire Department and Charles Bae. Arrangements entrusted to Dodge-Thomas Funeral Home of Glen Cove. Service and Interment private.

Of all his businesses, Richard enjoyed most his recent one arranging social events, because of all the friendships he made and treasured.

Richard was self-quarantined at home when his good friend Nassau County Detective Mike Caputo convinced him to go to Saint Francis Hospital. There he was treated with skill and such compassion, for which his family is very grateful.

Jean Capobianco of Glen Cove died on April 13, at age 88. Beloved wife of the late Frank. Loving mother of Michael C. (Elisa) and the late Linda. Dear sister of the late Carmella, Antoinette, and William. Proud grandmother of Nicholas and Stephen. Also survived by many loving nieces and nephews. Arrangements entrusted to Dodge-Thomas Funeral Home of Glen Cove. Service and interment will be private.

Bruce MacDonald of Port Washington, age 92, passed away peacefully on March 30. He was the beloved brother of Sandra Capatosto and Donald MacDonald (both deceased) and is survived by loving nieces and nephew: Anne Johnston, Jennifer Loftus, Ellen Grawe and Matthew MacDonald and step-daughter Karina King. Bruce was born and raised in Douglaston, NY and went to college at New York University where he was a hurdler. From there he focused his attention on race walking and appeared in three Olympics: 1956, 1960 and 1964. His involvement with the Olympics lasted 40 years in his roles as athlete, coach, official, judge and announcer. Bruce also brought his talents to Paul D. Schreiber High School as a teacher and coach. He coached countless world and national class race walkers, all were like his second family. Bruce received many awards in his lifetime, including Hall of Fame Inductee into both New York University Athletic Hall of Fame and the Paul D. Schreiber High School. He was twice named Girls Track and Field

Coach of the Year for New York and was even nominated as national coach of the year, one of eight finalists. Additionally, he was the first recipient of the Bruce MacDonald Service Award, named after him, and it is now given each year at the LI Track & Field Assoc. Awards Dinner. The impact he made to the students he taught and coached is immeasurable; however, he received as much from them as they received from him. Bruce lived a very happy life in Port Washington and was often seen driving around town, always making time to connect with all he encountered. A Memorial to honor his life will be in the future, once it is safe and healthy to do so. Announcements will be made through Facebook, especially to the wonderful and supportive race walking and track and field community.

Emilie Joan (nee Flannery) of West Hempstead and formerly of Manhasset, joyfully entered Eternal Life on Divine Mercy Sunday, at the age of 91. Her funeral Mass was celebrated at home around her bedside, surrounded by her family (via Zoom). Although “the doors were closed,” the Peace of the Risen Christ was radiantly present. Emilie Joan was thus reunited in the newness of Easter Life with her beloved spouse, the late Francis J. She remains, from the Kingdom of God, the prayerfully zealous mother of 10—Msgr. Frank, Mary Gallagher (Michael), Gerard (Katherine), Eileen Stapleton (Mark), Christopher (Donna), Kenneth (Tracy), Peter (Patricia, Cindy), Joseph (Kelly), Patrick (Jill), and Tobias (Mary). Joan was cherished by her 23 grandchildren; five great-grand-children and many loyal friends. Burial entrusted to The Charles J. O’Shea Funeral Home. 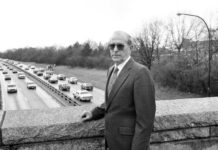 Letter To The Editor: Saluting A Wonderful And Terrific Mayor