Is there a gang or drug problem in Carle Place?

The answer, according to the people best positioned to know, was that there is not.

Cops and community came together earlier this fall at the Carle Place High School auditorium for a quarterly forum.

* According to one definition, “problem-oriented policing aims at solving persistent community problems by identifying, analyzing, and responding to the underlying circumstances that create incidents.”

One slide proclaimed the theme of the night: “We need the community’s involvement. Together, we can make a difference.”

The inspector said that ultimately, the police department cannot operate at its best without the public’s assistance.

“There are 177 patrol cars at any one time patrolling a county of 1.2 million people,” Musetich said. “Our best defense is the public. If you see something suspicious, give us a call and give us a description, and we will respond.”

One attendee stated that he never sees a patrol car in Carle Place and wanted to know if one was assigned.

They same resident responded that if that was the case, the car must be often called somewhere else and therefore is not in Carle Place.

“We have 25 sectors in the Third Precinct,” Costanzo replied. “[Patrols] are dedicated to that area, but if assistance is needed in [another] sector, they go.”

The Westbury Times asked about Westbury Mayor Peter Cavallaro’s criticism, expressed on numerous occasions to Nassau County Executive Laura Curran and Police Commissioner Patrick Ryder, that his residents pay well more than $7 million in taxes to support police operations, but the village does not get the commensurate amount of patrol cars.

“The Village of Westbury has two sets of cars dedicated to Post Avenue, [numbers] 314 and 319,” the inspector replied, noting that past criminal patterns can sometimes determine how many resources are dedicated to an area.

Further, he said, police officers are all trained first responders, and when there is an ambulance, they sometimes have to leave their patrol area.

“We had more than 4,000 calls last month, and it’s usually two cops going to one call,” he said. “You do the math…that’s a lot of calls in one day. Take a simple aid case [when] someone is not feeling well. Two cops will respond to that location as well as an ambulance. The Westbury and the Carle Place cars are going to respond to that.”

When that happens, Cooper went on, the responding officers and their cars will be out of action for at least an hour.

“It’s very easy to say that you don’t see a cop,” Cooper concluded. “I tell you they’re running around from call to call to call. And when they don’t have a call, they are on neighborhood patrol and we give information for them to check on certain locations that we’ve received complaints about. But if they have to respond to an emergency [they don’t have time to do those things].”

During the Q&A, a resident wondered about residential burglaries.

The inspector looked through a bound book and said, “I can tell you that year-to-date, there have been 45 residential burglaries in the Third Precinct, a 35-percent increase from last year.”

To a question about gangs, Costanza said he hadn’t seen any activity in Carle Place, while the inspector observed, “We don’t see anything major happening in Mineola.”

One woman said she had seen or heard about MS-13 graffiti, but the officers stated that gang activity was minimal in the district.

“One of the things we’ve been doing about that is week-long training [involving] all the POP and a lot of the community affairs cops,” Cooper said. “We’re starting to bring back the program called Gang Resistance Education and Training (GREAT). We go into middle schools and do lessons with kids about personal growth. We teach them all the things that are bad about gangs and help them with life skills as well.” 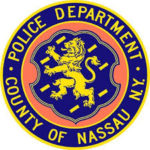 Musetich referred to a map on the screen showing the precinct’s reach. It includes the Village of Westbury and hamlets of Carle Place and New Cassel. Among the areas of interest within the boundaries are the Nassau Coliseum, Mitchell Field, Museum Row, the county government offices, county jail and community college, Eisenhower Park, Nassau University Medical Center and Roosevelt Field Mall.

The shopping haven is a major draw, with Musetich revealing that “on a normal day you might have 100,000 people going into the mall. On a weekend or holiday, the turnout might be up to 250,000.”

When residents complain that they don’t see enough patrols in the area. the inspector suggested, the cars are often called to the mall.

Musetich said that with Daylight Savings Time ending on the first Sunday in November, darkness descends early, and the crimes rise accordingly.

His basic message was to lock up vehicles and house doors, as burglars look for opportunities in those places.

“We have issues with the fitness centers’ lockers,” Musetich went on. “This is a nationwide issue. People go to work out in the gyms and [criminals] try to break into their lockers and into their cars as well.”

There has been a rise in frauds and scams, mostly via telephone. Common ones target seniors who are told a relative is in trouble and someone pretending to be a grandson or nephew (or a fake “lawyer” supposedly representing the affected person) asks the grandparent to wire money for bail or a lawyer’s fee. People pretending to be from the IRS and demanding back payments are among the many different types of scams.

New to the crime list is what has been called “mail fishing,” in which criminals manage to retrieve letters from mailboxes, seek out handwritten checks, and chemically erase the name to whom it is written as well as the amount. To combat the latter, the police suggest you seek out the newer tamper-proof mailboxes or go to the post office itself and use either the collection box inside or hand the letter to a postal clerk.

Costanzo said the precinct would be glad to give a presentation to any school, civic association or senior citizen group.

“Burglaries go up at this time of year, so we’ll give you some tips,” Costanza said, and aside from securing the car and home, he suggested that those who had house alarms should prominently display an alarm company logo/warning that can be seen from the street, as well as place stickers on doors and first story windows.

“If people see the signs from the street, they won’t bother trying to burgle the place,” he said.

Jewels and valuables should be photographed and marked with a driver’s license number to make them easier to trace.

Costanza additionally suggested that sliding glass doors be outfitted with a metal or wood bar to make them harder to pry open; most burglars, he said, use a weak sliding door mechanism to get inside.

Among the “don’ts” were announcing one’s vacations on social media, leaving empty garbage cans all day by the curb, letting shrubbery overgrow by the front windows, letting mail or packages or delivered newspapers accumulate (have a trusted neighbor pick them up) and leaving the driveway empty (arrange to have a neighbor park a car there).

“If you see something suspicious in the neighborhood, call the police—don’t try to do anything yourself,” Costanza said.

A resident asked whether one can request anonymity when calling the police. The answer was yes, and Cooper said that every call was responded to.

“You don’t have to tell us who you are,” Cooper added. “We’d like to know who you are in case the responding officer sometimes wants to get more information from the [person who made the call]. But we also understand that people like to remain anonymous. They don’t want any repercussions against them.”

With the holiday season at hand, so-called “porch pirates” will ramp up their activities.

Among the suggestions was to have the company ship the packages to one’s place of work, to a trusted neighbor who is home during the day, and even to the back of the house, where they will be out of sight.

Cooper summed up his holiday shopping advice as “Conceal it or they’ll steal it.”

“Try not to carry a lot of cash,” he cautioned. “I can’t tell you how many times I have been on patrol in the mall and have seen a person pull out a big, thick wad of cash. You don’t need to carry [that much]—it just makes you a target. Someone sees that, and you’re going to be on their radar.”

He also suggested “dressing down” and not wearing a lot of jewelry. In the same way that police teach children to walk to and from school with a buddy, shopping with someone else will likewise increase one’s safety.

“Walk with your head high. Don’t be looking at your phone because then you won’t be paying attention to who’s looking at you,” Cooper said. “Always look around and be aware of your surroundings.”

Cooper advised that women keep their purses close, as there has been an increase in purse snatchings at the Westbury Costco. It usually involves two people, one to distract a victim, and the other to steal the purse. Tying the purse to the shopping cart also discourages snatchings.

He went on, “Put your purchases in the trunk. Lots of times we see people buying lots of stuff and putting them in their front or back seats. There’s so many ways that you can make it easy for [criminals.] Let’s not make it easy.”

Cooper concluded, “Find your keys before walking to your car, especially late at night. And as soon as you get into your car, lock the car door.”

He added, “If someone pulls on your purse and you’re in the process of being robbed, just let it go. It’s not worth you getting injured or worse. Those things can be replaced—you can’t.”

One of the best things residents can do, Costanza said, is sign up for the Smart 911 public safety service at www.Smart911.com. This cell phone app allows users to create a free profile that will be useful for 911 responders, giving them such information as number of pets in the house, and residents’ allergies and prescriptions.

According to a flier handed out by the police, “This safety profile provides a way for residents to also include information that will enhance disaster response such as power needs for medical equipment, evacuation assistance and sheltering needs. In the event of a natural disaster, public safety officials will be able to quickly determine which residents need assistance.”

The Third Precinct headquarters is located at 214 Hillside Ave., Williston Park. For non-emergencies, call 516-573-6300. Always dial 911 for any emergency.