No one in need is turned away from the Westbury Neighborhood House.

If they don’t live in its service area, they are still offered a serving of food. Then they’re given information on where to seek help in their hometown.

Word of mouth has made it known well beyond the borders of the places it serves—Westbury, Carle Place, New Cassel, and Old Westbury.

Ray Muntz, president of the board of Neighborhood House, recalled how a woman from the Bronx showed up once, seeking something to eat.

“How did you get here?” Muntz asked her.

“Somebody gave me a train ticket,” she replied.

“I said, ‘Well, put this into your mind: the train ticket is worth more than the food we’re giving you.’ I told her to go to City Harvest or another agency in the Bronx,” Muntz related.

Now in its 103rd year, the Neighborhood House is, in Muntz’s words, “an independent non-profit charity serving our less fortunate neighbors.”

It offers a food pantry, toys at Christmas, Thanksgiving turkeys (limited to 40) with the trimmings, clothing, housewares and more.

Asked how he got involved, Muntz said that a personal friend invited him to join the board, and he agreed.

“I had the time,” observed Muntz, who is retired from Grumman, where he had been head of a planning and financial division. “I was a Cub Scout leader, and the Cub Scout motto [begins] “On my honor, I will do my best.’ I’m just a big Cub Scout and we do the best we can.”

Muntz said the charity recently lost one of its most valued volunteers, Debra Goldstein. In the course of her three years there, she had made use of her licensed social worker training and was the sole person on the payroll, paid for the 10 hours a week that the House is open. Muntz said that she needed full-time work.

Muntz is taking on Goldstein’s tasks until a replacement can be found, but admits she had a skill set—including her counseling experience, fluency in Spanish and knowledge of French (to deal with the large Haitian community)—that he can’t match.

Another big loss came when the charity’s treasurer, Kenneth Jenks, had to give up his volunteer duties. Jenks died in 2011 at 91.

“He was a World War II vet, an old-time banker and he knew what he was doing,” Muntz said. “One day he came to us and said, ‘I can’t do this any more’ and showed me how to do some things.”

Therefore, a volunteer treasurer is also on Muntz’s wish list. He has to keep the books and fill out the quarterly reports to the state and federal governments, including an IRS Form 990 that every non-profit must submit.

Muntz maintains files on about 600 clients. Some are regulars; others might go years between visits. Only one visit per month per client is allowed, though exceptions are made for emergencies.

In an article in The Westbury Times marking the organization’s 98th anniversary, Muntz noted that “prospective clients must first go through an intake process, where they discuss their needs and resources with a social worker; if deemed eligible for assistance, they are given access to food, clothing, counseling, housewares, and other resources aimed at getting them back on their feet.” 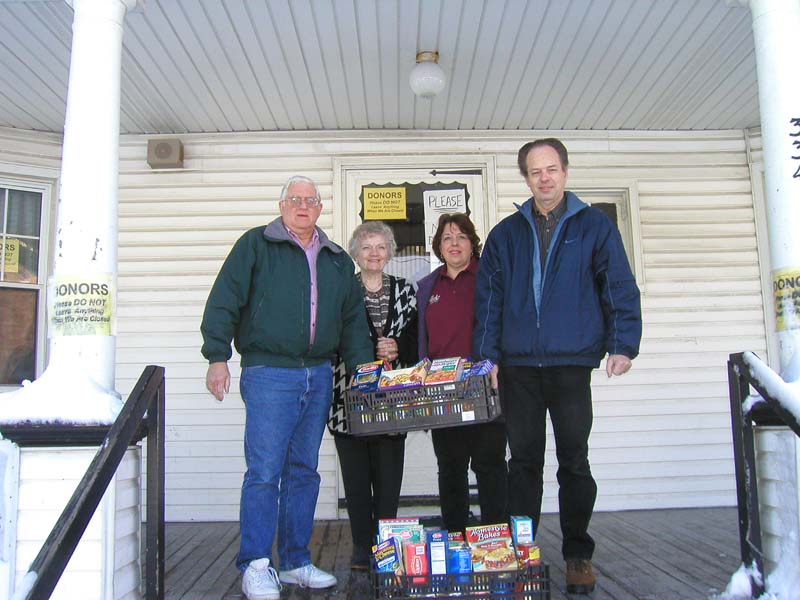 Several foundations that in the past have helped out with Neighborhood House’s modest budget of about $35,000 per year have turned off their spigot, so fundraising is more important than ever. About a third of the revenue comes from the appeal letters sent out in November. Muntz said that the charity also asks for a modest donation when clients choose donated clothing with price tags still on it.

“Most of our funds come from individuals and local businesses. It is getting harder, recently,” Muntz said.

The charity will also benefit from a dinner on Oct. 12 hosted by the Islamic Center of Long Island in Westbury. Habib Ahmed, president of the ICLI, is also a Neighborhood House board member (see sidebar).

The Westbury Neighborhood House invites the community to its inaugural fundraising luncheon on Saturday, Oct. 12 at 12:45 p.m. at the Islamic Center of Long Island, 835 Brush Hollow Rd., Westbury.

Sample a variety of food and participate in a silent auction.

If unable to attend, donations are appreciated.

As it was noted in the article in The Times in 2016, “While the mission of the Westbury Neighborhood House at times seems to be an uphill battle, Muntz said that the ability to positively touch

so many lives in the community makes all the hard work more than worth it.”

The charity has been at its present location—the corner of Winthrop Avenue and Lincoln Place—since 1920. It was founded in 1916 and has kept the name ever since.

In its early years, it served the community in ways that now are provided by the county social services or school districts.

“We’re just fortunate that we can do it. We have people that would probably starve without our help,” Muntz told The Times in 2016.

The Neighborhood House is always seeking food, clothing, housewares, school supplies and holiday toys, as well as money, to enable the charity to serve its clients. It is located at 334 Winthrop St., Westbury, and is open from 10 a.m. to noon Monday through Friday, Call 516-333-0207. It closes on major holidays and the last weeks of August.