The Nassau County High School Athletics Hall of Fame (NCHSAHOF) is organized as a means of recognizing, preserving and promoting the heritage of interscholastic sports in Nassau County. The Hall of Fame honors the contributions and accomplishments of individuals who are worthy of countywide recognition.

Nominees must exemplify the high standards of sportsmanship, ethical conduct and moral character.

The categories of nomination include: administrator, official, contributor, athlete and coach. All candidates for the Hall of Fame must be at least 35 years of age prior to December 1 of the applicable year in order to be considered for induction.

Nominees for the Nassau County High School Athletics Hall of Fame will go through a two-step process before being selected for induction. The 10-member Screening Committee will determine which candidates are worthy of consideration. The five anonymous members of the Selection Committee vote independently to determine the candidates who will be inducted into the Hall of Fame.

Applications can be found on the Section VIII website at www.secviii.org. Click on the link for “Interscholastic Athletics.”

The following profiles were written up in the journals for the respective programs and have been slightly modified. 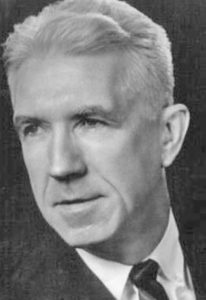 Simply put, John Kickham was known as the “Father of Section VIII.” His contributions and dedication to Nassau County athletics are a rich part of our history and growth as an organization.

He was the model administrator, and the first president of Section VIII. He served an unprecedented 10 years in that role. Kickham was respected and admired by athletic directors, school administrators, coaches, and above all—the athletes of the schools in Nassau County.

Kickham was awarded many certificates of merit and distinguished service awards, including the Certificate of Recognition from the New York State Coaches Association for his 33 years of selfless service.

John taught mathematics and coached at Westbury High School from 1933 through 1951. He became the principal of Westbury High School, a role he held for 18 years. In 1968, he was named the Westbury Public School District Assistant Superintendent, a position he held until 1973.

Kickham’s children all recount his pride in all things related to his service as president of the NYSPHSAA.

A great family man, Kickham was married for 59 years to his wife Agnes. He was the father of seven children, grandfather to 17, and presently has 23 great-grandchildren. Kickham resided in Westbury for 64 years. He loved his family, his church, the field of education, athletics and all the students he helped over his 43 years in education.

Becky King served as a member of the Section VIII reorganization committee to initiate and organize competitive athletics for girls in Nassau County, and to formalize the involvement of female athletic administrators in Section VIII. She also served as the county’s field hockey coordinator.

King was an outstanding coach in seven different sports in her district: softball, lacrosse, field hockey, basketball, gymnastics, track and field and volleyball, amassing 403 wins. She led the Carle Place field hockey team to the first county championship in that sport.
King was inducted into the Carle Place Hall of Fame and is so respected that the gymnasium at Carle Place High School is named in her honor.

King was selected by the United States Olympic Committee to train New York State volleyball coaches. She is an honorary national girls’ basketball official and a nationally-rated girls’ gymnastics judge.

In 1976, King received an award from the New York State Coaches Association in recognition of exceptional coaching in basketball and field hockey.

King extended her gratitude to her colleagues in her beloved Carle Place. “I must give special thanks to the following colleagues who enabled me to establish an all-inclusive sports program for the girls: Principal Joe Burke, and athletic directors Joe Coady and Jim Colligan, along with an outstanding Carle Place staff.” 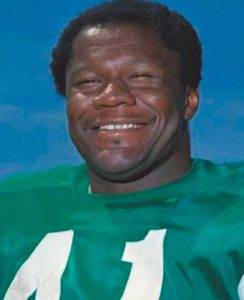 Matt Snell graduated from Carle Place High School in 1960. Known as “Mattie” in his playing days there, Snell’s yearbook write-up noted that “He eats, sleeps and plays football.” The captain of the football team also competed in track and field and golf, but the gridiron is where he made his name.

Snell enjoyed an outstanding three-year varsity football career, leading his team to a 23-1 record. The Frogs were undefeated in both the 1958 and 1959 seasons. Snell set scoring records and was the leader and best player. In 1959, he won the Thorp Award as the most outstanding high school football player in Nassau County.

After graduating from Carle Place, Snell played collegiate football at Ohio State under legendary coach Woody Hayes. Snell played both ways as a defensive and offensive end before starring as the Buckeyes’ fullback during his senior year. In 2000, Snell was named to the Ohio State All-Century Team.

Snell was then drafted by both the NFL and the old American Football League and opted to play for the AFL’s New York Jets. He was the AFL Rookie of the Year in 1964 and a three-time All-AFL All-star.

In 1969, he helped lead the Jets to a 16-7 win in Super Bowl III over the heavily-favored Baltimore Colts. In that game, Snell led all rushers with 121 yards and scored the Jets’ only touchdown.

Injuries limited his professional career to 86 games and he finished with 4,287 rushing yards (4.0 per carry) and 1,375 receiving yards (7.1 per reception). He scored 24 touchdowns and also developed a reputation for his pass blocking.

Snell was also inducted into the Carle Place High School Hall of Fame.

Christine Ceruti, the current athletic director at Carle Place, said, “Matt Snell is the best athlete to walk through the halls of the Carle Place School District.” 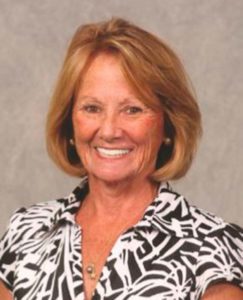 As good as the 1969 graduate was, it may still pale in comparison to what she did at her alma mater as the head coach of field hockey and lacrosse. O’Connor took over the reign of the girls’ lacrosse program in 1978. For the next 12 years, her teams would dominate as O’Connor led the Frogs to a 199-11-2 record, 11 league titles, eight Nassau County championships, and were crowned New York State Champions five times, four of which were undefeated seasons.

During one stretch, Carle Place won 71 straight games. O’Connor’s field hockey teams were equally dominant. From 1979-1988, Carle Place had a 146-18-21 record, capturing nine league championships, including seven in a row.

Beginning in 1983, when a New York State championship was initiated in girls’ lacrosse, the Frogs won that title four times. To break it down, between the two sports, O’Connor’s record was 345-29-23, with nine New York State titles.

2018 Hall of Fame inductee Barbara Sellers said, “Gloria’s players always responded to her philosophy of ‘Give it your best and never stop trying to improve.’ Her competitive spirit, leadership skills and love of sports benefited numerous student-athletes.”

In addition to being a longtime teacher and athletic director at Sewanhaka High School, O’Connor also served as assistant principal at Floral Park Memorial High School for five years, and later became the school’s principal for another four years.

O’Connor retired in 2008 as Sewanhaka’s assistant superintendent. She then went on to become the head field hockey coach at Adelphi University in 2008. Her collegiate teams compiled a 94-76 record, with two back-to-back NCAA Division II tournaments in 2014 and 2015. Her teams were conference champions in 2015, and she was named “Coach of the Year” by her peers.

O’Connor is proud of her 28 former athletes who went on to coach in Nassau County and remains grateful for the opportunity to coach and teach so many extraordinary student-athletes from Carle Place, while also getting to know so many wonderful parents. She remains forever appreciative of Becky King (her former Carle Place High School coach), and her mentors Barbara Sellers and Rosalia Gioia. It is significant that all these women are now Nassau County High School Athletics Hall of Fame inductees.

“Passing it forward” is still O’Connor’s top priority, as she now serves as an adjunct professor at Adelphi University, working as a student-teacher supervisor. 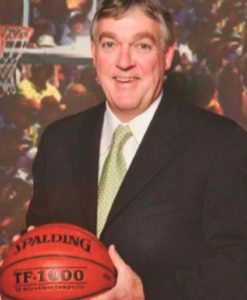 From 1971 to 2006, Colligan was a teacher and school administrator, which included being the athletic director at Carle Place High School. Those years also included 33 years of coaching the Frogs’ boys’ basketball team. For 29 years at the varsity level, Colligan’s teams made the play-offs 24 times, including reaching the New York State Final Four in 1999 and 2006.

Colligan coached one of the greatest games ever played on Long Island, a 67-66 Carle Place win over East Rockaway in the Nassau County Class “C” semifinal, a victory earned after five overtimes. The 1965 graduate from Westbury High School was all about commitment. When he retired from Carle Place, his sick day “bank” had 465 days in it.
Former Carle Place Superintendent David J. Flatley said, “No single quote could possibly capture the essence of Jim’s work.”

Hall of Famer Bernie O’Brien, a former executive director of Section VIII athletics, said, “Jim always managed to find time to be a major part of other vital activities in the county, aside from his daily workings at Carle Place.”

He served on the Section VIII Athletic Council and was also the Nassau County boys’ basketball coordinator for 20 years.

Colligan had a presence in the classroom and as a coach on the court, always exemplifying a high level of character. His school district dedicated the basketball court in his honor at his last home game.

In 2018, Colligan was inducted into the New York State Basketball Hall of Fame. With all that he accomplished, Colligan also served and protected our nation. He served in the United States Army for 29 years, in both Vietnam and Desert Storm, and was promoted to full colonel. He was awarded two Bronze Star medals, as well as a Meritorious Service medal and four United States Army Commendation medals.