The “best of the worst” way to determine the outcome of a tied soccer game—penalty kicks—resulted in a crushing defeat for the Carle Place boys’ soccer team.

Facing Section I champions Briarcliff (17-2-3) on Nov. 3, the Long Island Class B titleists twice came back to tie the score in a state quarterfinal at Berner Middle School in Massapequa.

With the regular 80-minute match ending in a 2-2 tie, the teams battled through two tense and thrilling scoreless 15-minute overtimes with no resolution.

After each team converted four of the five attempts from the penalty spot, the shootout went to a rare second and sudden-death round.

First to step up to the line was Carle Place goalie Kevin Fernandes, whose heroics had kept the Bears from scoring on several occasions. His left-footed blast was blocked by his counterpart, Andrew Kanovsky.

Briarcliff’s Elias Hoffner then converted the ensuing attempt to send the Bears—making their longest postseason run—into the state semifinal this Saturday in Middletown.

“It’s a crappy way to advance and an even crappier way to lose,” Carle Place (9-2-3) coach Allen Foraker observed of penalty kick shootouts.

Three days before, his team had earned a trip to the opening round of the state tourney by beating Center Moriches via penalty kicks to garner the Long Island title.

Foraker related that he told his charges, in the postgame huddle, “You can be sad because you didn’t advance, but don’t be sad and upset because of your effort—your effort was outstanding.”

Alex Cabeca gave the Westchester side a 1-0 lead with 14 minutes left in the opening half, beating Fernandes from about 20 yards out.

Less than a minute later, Carle Place senior Marc Chiappone “bent it like Beckham” to place the ball past Kanovsky on a 30-yard direct kick.

In the first part of the second half, both keepers had occasions to kiss their goalposts; Chiappone for the Frogs and Jason Oppong for the Bears watched their scoring attempts carom off the posts.

Both teams slugged it out in a very physical game in which the high swirling winds gave the ball a lot of what old timers called “English.”

The Frog offense managed to spring Chiappone free for dangerous runs deep in the Bear zone. Once, his breakaway was broken up by Kanovsky’s sliding tackle, and Chiappone looked in vain for penalty.

After Carle Place put up a series of shots that tested Kanovsky, the Bears struck back as Cabeca’s pinpoint lead pass set up a diagonal shot by Alex Benson that beat Fernandes to the far post.

Minutes later, Carle Place’s Chris Deveau lasered a shot that Kanovsky could not control, and the ball was barely cleared from the danger zone.

Chiappone got a second chance to show his direct kick skills, this time from exactly 31 yards out. Once again he managed to clear the defensive wall and beat Kanovsky for the tie with 16:22 left in overtime.

“They’ve been resilient all year,” Foraker said of his team. “Some people might say that we were one of the toughest teams in the county because we don’t give up, [and had] a ton of heart. That’s the Carle Place athlete-[someone with] a ton of heart.”

As regulation time wound down, accurate passing from teammates, along with his dribbling skills, gave Chiappone further opportunities for heroics. On two occasions he could only react with frustration as his shots went just wide of the mark.

In the first overtime, Chiappone once again was reduced to holding his head in his hands as his point-blank blast was blocked by Kanovsky.

Both teams had their chance in the second overtime, with Fernandes diving to his right to deflect a dangerous volley by Oppong.

At the other end, Gio Fabiano fed Darren Morales for a golden opportunity. Stealing a page from Chiappone, the junior watched helplessly as his shot, which skidded past Kanovsky, went wide of the far post.

Then came the tense, crowd-pleasing shootout to determine the contest.

Carlos Salgado, Fabiano, Kevin Graca and Chiappone converted for the Frogs as each team netted four in the first round before the game was settled in the second.

“We were fortunate to see Carle Place play, so we had a bit of a scouting report on their penalty kicks. I was real nervous about them,” Briarcliff coach Brandon Beck said. “Overall, I think Carle Place put in an amazing effort—they have exceptional talent and an excellent, respectable program.”

Beck also singled out the play of Chiappone and Fernandes.

“They gave it their all. I’m super, super proud of them,” Foraker summed up his squad. 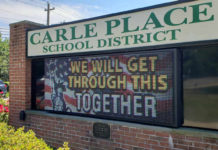 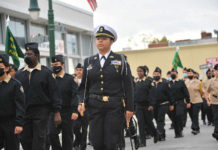 A Homecoming That Travels Around The World