There’s an old cliché that says to write what you know, and in the case of Paul Mila, that means transporting readers to the clear waters of Cozumel, Mexico. The Carle Place resident recently released his eighth book, Killer In Paradise, a project that allows him to mix his love of scuba diving with his passion for writing. 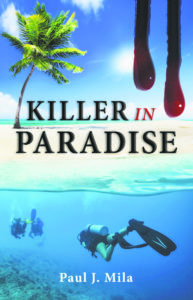 Killer in Paradise is the fifth in a series of thriller/adventure books, with this one following art gallery owner Dayle Standish as she searches for a priceless artifact dating back to Christopher Columbus. However, Standish isn’t the only one looking for the artifact, and she soon encounters a dangerous villain who has art collectors on his hit list.

Both the novel’s protagonist and the object of her search draw inspiration from real life; Standish is inspired by a friend of Mila’s who owns an art gallery in Roatan, Honduras, and the artifact is an early 16th century globe engraved on an ostrich egg. Discovered in 2013, the artifact is thought to be the earliest surviving globe showing the new world.
Drawing on his real experiences and people he’s encountered on his diving adventures allows Mila to bring life and intricate detail to his books.

“The more experiences you have in life, the more interesting your writing is,” Mila said. “Even though it’s fiction, it helps with the plausibility and details.”

Mila’s first foray into diving happened while on a trip to Cozumel with his neighbors in 2000. The experience changed his life, and he eventually quit his job at MasterCard to dedicate more time to scuba diving and writing.

Writing had been a lifelong interest of Mila’s and the author noted that once he started scuba diving, the hobby became a serious endeavor.

“They go hand in hand,” Mila said. “Scuba diving led to the writing. The experiences and adventures gave me something to write about. And now when I’m scuba diving, I’m always wondering if that could be another story.”

While Mila said his heart is in fiction, it’s not his only forte; in 2015 he published Bubbles Up, a nonfiction narrative he co-authored about his different diving adventures, and in 2016 he penned Harry Hawksbill Helps His Friends, a children’s book he’s currently working on a sequel to. He also has a book on underwater photography available.

Though writing a novel is hard work, Mila said he’s sure there’ll be another one coming down the line, especially with places like Cozumel providing such rich inspiration.

“Every book I write I think is going to be the last one, but then I get another idea and there we go again, off on another adventure,” said Mila.

Killer in Paradise, as well as Mila’s other books, are now available on Amazon as well as at www.paulmila.com.