If imitation is the sincerest form of flattery, then Rob Alvey has raised the bar considerably when it comes to legendary American humorist and lecturer Samuel Clemens, who was better known as Mark Twain. 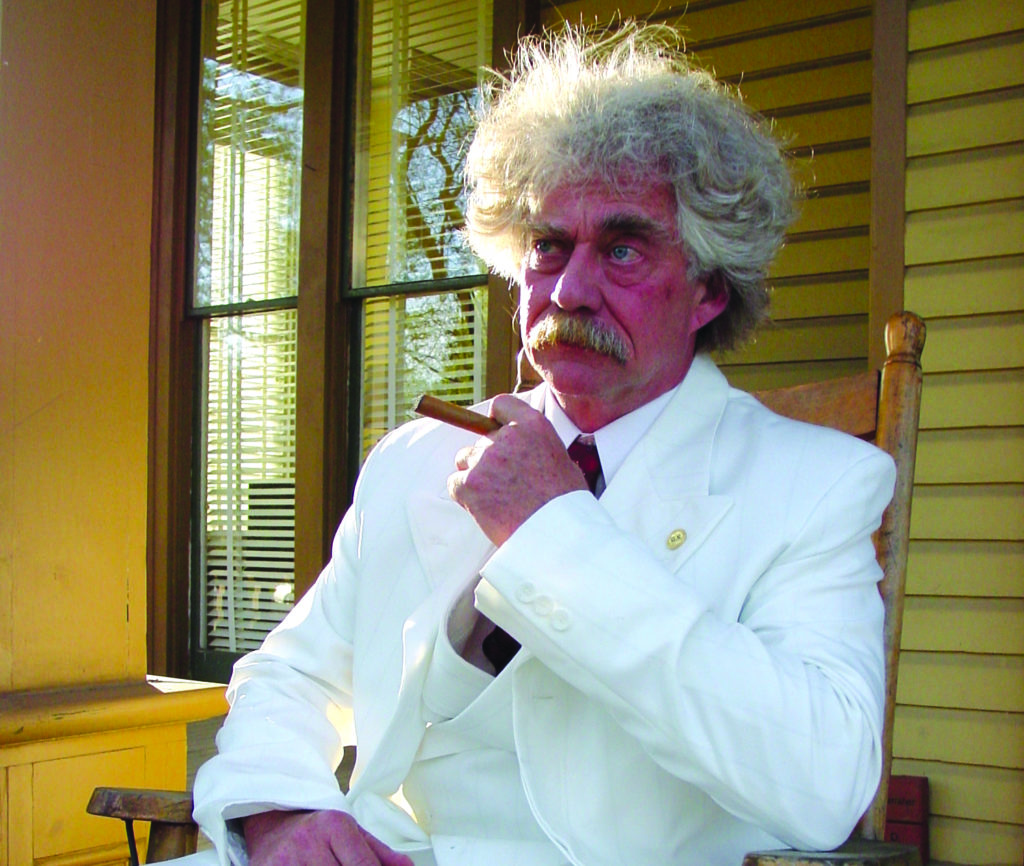 For nearly a decade, Alvey has been donning a white suit and taking to the stage doing readings not unlike actor Hal Holbrook, who has been doing a similar show since he debuted it in 1954. With a full head of hair and his bushy white mustache, Alvey is pretty convincing and will be going on the road again to the Westbury Community Center on Nov. 30, where he will be headlining a fundraiser for Westbury Arts. It’s an organization that the Garden City resident and his wife Suzie strongly support.

“Suzie and I are friendly with the folks over at the Westbury Arts Council. They have an outdoor film festival every summer that I’ve gone to for a couple of years. What Westbury has done, between the mayor and these local businesses, reminds me of the enthusiasm I used to see with the Garden City Chamber of Commerce,” he said. “At least Garden City is established. Westbury wanted to grow, so I approached Julie Lyon, who is one of the chief people there, and said I’d be happy to do a fundraiser for them. She loved the idea and wanted to have it happen on Samuel Clemens’ birthday, which I thought was perfect.”

The show will run about 90 minutes with a vocal group called the Long Island Harmonizers performing period pieces that were consistent and contemporaneous from Mark Twain’s lifespan. From there, Alvey will take center stage as Twain, something that he’s done roughly 20 different times dating back to 2008.

“I will be dressed up as Mark Twain and have my cigar. There will be some Clemens-type remarks and some of mine, because I try to bring it up to contemporary standards in terms of what Mark Twain would say if he was alive in the 21st century,” he explained. “I have so much information that I could talk about with the recent presidential election. Politics is the same, but let people laugh a little bit. So that’s what it’s going to be about.”

Alvey has spent the bulk of his adult life as a geologist employed by the Environmental Protection Agency (EPA), the person who spearheaded the creation of the nine-acre Garden City Bird Sanctuary back in 1996 and a professor at York College. But it wasn’t until his middle daughter, Erin, who was a photography major, came home and needed to do a project and recruited her father to be a model when the Clemens bug bit Alvey.

“She desperately needed a model, so she dressed me up as Einstein and as Kurt Vonnegut and the pictures were phenomenal. Then she dressed me up as Mark Twain and I thought I could do something with that,” Alvey recalled. “Right away I booked the parlor at the Garden City Community Church and I thought I could do Hal Holbrook’s play. After booking the room and starting to sell some tickets for the Garden City Bird Sanctuary fundraiser, I realized there was no script. I thought I could just rent the script. It turned out that Hal Holbrook had memorized 50 hours of material from his research starting from when he was doing it in the 1950s. So I had to do the same thing. Of course I did some different things, but it went really well.”

Rob Alvey will be starring in “An Evening With Mark Twain” on Nov. 30 at the Westbury Community Center. Visit westburyarts.org for more information.