A Westbury man was arrested Feb. 5 for robbing a taxi driver in New Cassel. 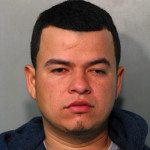 According to detectives, Wilfredo Torres-Ramos, 31, and another (not yet apprehended), while in a taxi on Broadway/Malaney Avenue on Feb. 5 at 4:05 a.m., pulled a gun on the taxi driver and demanded money. The victim complied and handed over an undisclosed amount of cash.  The subjects fled the scene on foot down Malaney Avenue towards Union Avenue.

No injuries were reported.

Subsequent investigation by detectives led to the arrest of Torres-Ramos on Sunday, Feb. 5 at 7:30 p.m. at his residence. He is being charged with first-degree robbery and fourth-degree possession of a dangerous weapon. He was arraigned on Monday, Feb. 6 in First District Court, Hempstead.