Writer Paul Mila is diving into the world of children’s books with his latest undertaking, Harry Hawksbill Helps His Friends. More than just a book about the sea, the work provides a deeper social message about acceptance. 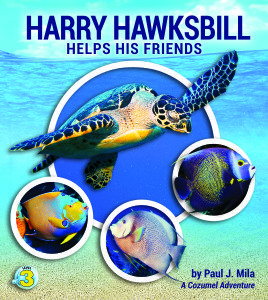 The Carle Place resident has previously written six books for adults including Basic Underwater Photography, Dangerous Waters, Whales’ Angels, Fireworks, and Near Miss, in addition to co-authoring Bubbles Up. While at a book signing at a scuba show, an editor from Best Publishing approached him and asked if he would be interested in writing a children’s book about scuba diving.

“I’ve never done a children’s book before and I thought I’d give it a shot,” said Mila.
Mila did a little research before just jumping into the creation of his first children’s book. He picked up some picture books about sea life to check out the writing and get an idea of how long or short the sentences should be.

“All of the books told stories about the sea and sea life, and my book does that to a point,” said Mila. “I wanted to include a broader social message for kids.”

With the use of photographs, Harry Hawksbill Helps His Friends follows Harry, the hawksbill turtle, as he travels the sea in search of food and friends. Along the way, he meets scuba divers Paul, Kristi, Alison, Kendra and Fulvio. The scuba divers pictured in the book include Mila and his scuba diving friends.

“We thought it would be cool to add some realism to this fictional story,” said Mila, explaining why he used his own photographs throughout the book instead of illustrations.

Harry soon discovers that his favorite friends, the angelfish, are not getting along with each other because they have different appearances. Children learn about the many different types of angelfish and how they vary in color and appearance. The queen angelfish and the French angelfish will not spend time with Harry because he is hanging out with a gray angelfish. Similarly, the queen angels will not associate with the French angels and vice versa.

The hawksbill turtle teaches his friends that you should not judge others by their appearance. Try to get to know someone, and you will probably end up liking them.

Mila explained that the idea of racial discrimination and teaching children about acceptance stems from the song “You’ve Got to be Carefully Taught” from the musical South Pacific. The song describes the idea that a child must be taught about discrimination; it is not inherent in the child.

“The song always resonated with me,” said Mila. “Without being too preachy I thought we could work that aspect into the story and teach kids about acceptance.”

Mila hopes that the book resonates with young children as the song did for him.

“Even without my influence, kids are fascinated with sea life,” said Mila. “They are really drawn to sea creatures. I hope to develop and enforce this interest, and teach them about our underwater world. The other part was the social message, since they are dealing with a lot of outside influences and meeting kids from different backgrounds. If they get to know kids despite the surface, they will grow into accepting adults. The goal is to get this into the hands of as many kids as we can.”

Mila’s new children’s book contains real-life photos of hawksbill turtles, angelfish, Mila’s scuba diving friends and even Mila. It combines fun facts about sea creatures and the ocean in which they live with an important lesson for kids to learn.

At the back of the book, questions are provided for parents or teachers to use to help children reflect on what they have read and learned from the reading. Answers are provided to the questions with page numbers, so the children can hunt for the answers in the text. This teaches them how to go back in a text and find the answer to a question, a basic resource children need to learn. The children’s book strikes the perfect balance between learning and making reading fun.

On the surface, Harry Hawksbill Helps His Friends may appear to be a book to teach young children about sea life through a fun story, but the book gives so much more as kids learn that they should get to know others and not judge others based on their physical appearance.

Harry Hawksbill Helps His Friends is currently available at Bestpub.com, Amazon.com, the Scuba Network in Carle Place and Milabooks.com. It will soon be available at local bookstores.