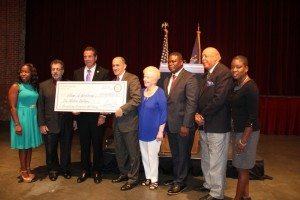 What would you do with $10 million?

That’s what the Village of Westbury wants to know as they hold a community input meeting for local stakeholders to voice their opinion on what they would like the $10 million grant the village received from Governor Andrew Cuomo’s office to go towards.

The meeting, which will be held at the Westbury Community Center on Wednesday, Oct. 26, from 7 to 9 p.m., is part of the Downtown Revitalization Initiative (DRI) grant process. It will include a short presentation by Mayor Peter Cavallaro, and some state representatives, as well as consultants who will explain what the village has been considering and the scope of the project. Residents will then split into small groups with consultants, and have the opportunity to explain their “wish lists” for the downtown.

“It’s a community meeting to solicit input into the process and what should be considered in terms of priority projects and needs,” Cavallaro said. “We hope to have as broad a [group] participating from different segments and stakeholders in the community so we come up with the best ideas on how to spend the money.”

The Village of Westbury was awarded the $10 million grant from Cuomo’s office in July, which allows the local municipality to partner with regional economic development consultants to create a more vibrant downtown.

Oct. 26 will be the first of three public input meetings, with the next one taking place in January. People can also email comments to WestburyDRI@gmail.com.