By Betsy Abraham and Leigh Anderson

Westbury has a rich history, dating back to 1658 when it was settled by Quakers. What was once miles of farmland and a stop along the Underground Railroad has turned into a vibrant suburban destination, with plenty of residences, restaurants and businesses, as well as numerous area attractions.

And while downtown revitilization is a focus, the Village of Westbury has taken major steps to preserve the rich foundation it was built on. The village board recently placed historic landmarks at various sites around the community, to recognize them as having a special character and historic, architectural or aesthetic interest or value.

“The whole intent is to raise awareness of local history and some of the things that exist in the community that need to be remembered from a cultural and historical standpoint,” said Village Mayor Peter Cavallaro. “There are places in our community which I think have interest, and should be marked.”

The mayor said the village’s desire to preserve its historical landmarks is right in line with its ongoing revitalization .

“It’s not inconsistent with making the community more sustainable,” Cavallaro said. “There’s hundreds of years of history here. You can make it the kind of place that is thriving for today, but let people know there’s a lot of things that happened here and people who came before us to make it what it is today.”

Gary Monti, Historical Landmarks Council committee chairman, said he hopes the signs will help people learn more about the community they live in.

“I hope people recognize that Westbury is not just a suburban community that’s been around a long time. It’s one of the oldest communities on Long Island and because it was a Quaker community it was different,” Monti said. “It’s a really interesting idea and people will be proud to be living in the village once they learn more about it.”

Long Island’s Vanderbilt Cup Races were one of the most prominent and awe-inspiring forms of entertainment just after the turn of the century, running one day in October from 1904 to 1906 and again from 1908 to 1910. Held on local roads such as Jericho Turnpike and Massapequa-Hicksville Road at their initiation, the races drew crowds of tens, and later hundreds, of thousands of people from Long Island, New York City and beyond, according to town historian of North Hempstead Howard Kroplick.

A Westbury grandstand served as the starting and ending point of the Vanderbilt Cup Race twice throughout the race’s history, and its location will be officially recognized as a historical landmark with a placard from the Village of Westbury.

“Pure excitement,” were the words he used to describe the atmosphere at the races. Car racing was a new phenomenon, and the Vanderbilt Cup Races drew in hordes of people eager to watch it for the first time.

However, the races were as dangerous as they were thrilling. Throngs of people stood on the roadsides as the cars flew by, sometimes at 100 miles per hour, said both Monti and Kroplick.

Kroplick’s website, www.vanderbiltcupraces.com, highlights the history and hazards of the cup races. The first spectator death occurred in 1906, prompting the building of the Long Island Motor Parkway, the United States’ first parkway designed solely for motor vehicle use. The race was permanently ended on Long Island after two driving mechanics’ deaths in 1910 and the parkway closed in 1938.

But even with the tragedies they caused, the Vanderbilt Cup Races made a profound imprint on Long Island’s history and the history of automobiles in the United States as a whole.
“It was one of the most significant races in the history of motor sports,” said Monti, explaining that numerous locals today do not know about the Vanderbilt Cup because the racing sites show no signs of their past.

The Religious Society of Friends Meeting House, located on the corner of Jericho Turnpike and Post Avenue, was built in 1902—though the original meeting house was founded in 1701—and has played a major role in creating the Westbury of today.

In 1957, the Westbury Friends School was opened on the property, which currently educates children ages nursery through first grade. Staying true to its long-ago-established Quaker values, the school focuses on simplicity, peace, integrity, community and equality, said Westbury Friends Meeting member Martha Smith. The other school on campus, Brookville Center for Children’s Services, is dedicated to pre-school children with special needs.

The cemetery on site is another crucial component of the meeting house’s history, as one of the first cemeteries to allow burials regardless of race. Some of Westbury’s most notable people are buried there—including members of the Hicks and Post families—and the cemetery is still in use today.

When considering its longevity and the effects that Quaker ideals still have on the community of Westbury, it is not hard to understand why the Westbury Friends Meeting House was chosen as one of six Westbury sites to be given historical landmark designation. The meeting house is not only a religious building, but a symbol for the open, inclusive mindset Westbury has upheld for centuries, as one of Long Island’s oldest and most diverse communities.

“[Quakerism] has had much more than a religious impact,” said Monti, highlighting the Quakers’ role as some of the earliest abolitionists in the United States. Not only did they free their slaves in the 1700s, but they also established the Charity Society to help educate the children of former slaves, Smith said.

It’s easy to overlook the brick, steeple-topped building at the corner of Union Avenue and Grand Boulevard. While the simple building itself makes no great boasts, the congregation of Westbury A.M.E. Zion Church has a lot to be proud of, including a history of more than 180 years.

The church began in 1834 as a congregation of freed and runaway slaves. Quakers, including the Hicks family, were instrumental in helping the church get started. The church started on Guinea Woods Road (now Glen Cove Road) in 1834, under the name New Light Baptist Church and led by pastor Liakim Levi. In 1867, the congregation moved to its current location at 274 Grand Blvd. in Westbury. In 1892, they changed the name to Westbury A.M.E. Zion Church.

Today the church has 100 members who stay connected with worship services on Sunday mornings, and Bible studies and prayer meetings throughout the week. They have numerous community outreach events throughout the year including movie nights, recreational activities and food drives. They also often partner with other churches in the area for community events, such as Kingdom Community Day.

What has now been transformed into the Westbury Community Center and War Memorial was once the home of a distinguished equestrian millionaire, well-known in the worlds of polo, racing and fox hunting alike. Ambrose Clark inherited much of his wealth as the heir to the Singer Sewing Machine Company and owned several properties both in the United States and abroad.

Clark lived and breathed horses; he was “a horseman pure and simple,” as his chauffeur William Davis said in a November 1979 historical society meeting, the transcription of which can be found at the Westbury Historical Society’s cottage.

Clark’s Westbury home, located at what is now 360 Post Ave., was built circa 1903, according to a 1972 article in Long Island Forum, entitled “Westbury’s Living Memorial,” by Edward R. Walsh. The article, found in Westbury Historical Society’s archives, states that the property included a “large attached stable with its 32 stalls, the carriage room, windmill and small ‘tack’ room where riding gear was stored and maintained.”

According to Walsh’s article, Clark sold his Westbury estate in 1909 to the White family, who resided there until 1932. Though fire destroyed the stable, windmill and carriage house, the main house and tack room remained intact, and in 1946, the home was dedicated as “a permanent memorial to the Westbury men and women who fought in both world wars.”

“It was really the heart of the village at one point,” said Monti. Horses played a prominent role in the culture of Westbury in the 20th century, and Ambrose Clark was in the middle of it all.

Nowadays, the historical site serves the people of Westbury, offering several activities for youth, adults and seniors. As Walsh said in his article, the Community Center, “created to enrich the lives of Westbury residents, is destined to ring with the laughter of future generations.” 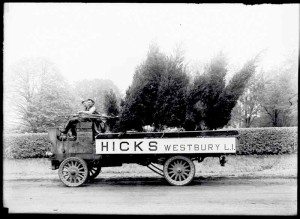 The Hicks family’s residence in Westbury dates back to the 1600s, long before its nursery business even started, which explains the deep-rooted ancestral connections it holds with the community today. After the family had been Quaker farmers in the Westbury area for more than 150 years, Isaac Hicks established Hicks Nurseries in 1853, which started out as a fruit tree business, according to current Hicks Nurseries president and Isaac’s great-great-great-grandson, Stephen Hicks.

Part of what has made Hicks Nurseries so successful are the contributions each generation has made, said Stephen, including the development of the Hicks Yew hedge by the horticulturist Henry Hicks. They’ve also taken part in landscaping locations on Long Island, as well as Sagamore Hill, the Lincoln and Jefferson memorials, and the John D. Rockefeller estate, Stephen said.

Throughout an existence spanning six generations, Hicks has evolved from its fruit tree beginnings and developed into an all-encompassing nursery, selling flowers, shrubs, trees, plants and more. However, even with the differing landscaping demands of today, the Hicks family has not forgotten where their business began. Displaying its neighborly atmosphere, Hicks hosts free, family-friendly events throughout the year.

Founded by Martha Bacon in memory of her husband Colonel Robert Bacon, the library not only holds special relics, maps and art from years past, but has also been teaching, inspiring and nurturing local children since its establishment in 1924. Bacon, who served as Secretary of State and Ambassador to France during Theodore Roosevelt’s presidency, believed in igniting curiosity in the minds of children, and it was for this reason that the library was built as his memorial.

“It’s really a living organism,” said Library Director Cathleen Merenda, highlighting the personality and impact the library has that other memorials do not. “It’s a memorial that has a very practical function for kids in the community…giving them a special place to spend their time that is uniquely theirs.”

Though the library has kept up with technological changes and expanded its scope of learning materials over the years, the aim to “develop children’s imaginations and abilities to dream” has remained steadfast, Merenda said.

Though many locals knew of the library’s historical status before the designation, Merenda hopes that having the plaque there for people to read will help spread the word about the library—past and present.

“I think [the library] should be a point of pride in the community because it shows, historically, that Westbury has cared for its children in a very unique and special way,” said Merenda, a tradition she is committed to continuing for generations of future children who come knocking at the library’s door.