Nassau County Legislator Judy Jacobs, known for her advocacy for several health and quality of life initiatives, died in Manhasset Hospital on Sept. 13 at the age of 77. Jacobs had been battling myelodysplastic syndrome, a disease which causes a decrease in blood cell production, since May. She suffered a fall in her Woodbury home due to her weakness from the disease and ultimately succumbed to the injuries. 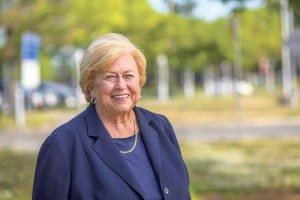 Jacobs had a long and impactful career, with her activism predating her election to the legislature in 1995. Most believe she will be best remembered for her successful campaign against tobacco, which included banning smoking in all restaurants and workplaces across Nassau County. Jacobs had hoped to see the smoking age raised to 21 and to see more extensive restrictions placed on the use of electronic cigarettes. Her reach to ban public smoking extended beyond Nassau County, as she met with officials from Suffolk County and New York City as well, in order to develop a regional policy. Suffolk officials also worked with Jacobs on Medicaid reform and public safety issues around Long Island.

Though Jacobs’ efforts have had an impact across the island, Michael Fener, the executive director of the Syosset and Plainview hospitals, will remember her for her work in his own community.

“She’s had a huge impact,” Fener said. “I couldn’t begin to count the ways she’s had a positive impact on our community. The biggest thing I’ll remember is how much she cared.”

Jacobs had been actively involved with Northwell Health, which includes both the Syosset and Plainview hospitals. As the director of community relations, one of her contributions was her lobbying for the reopening of Syosset Hospital more than 30 years ago.

“She lived and breathed doing what’s good for the community,” Fener added. “She never served her own interests, and she’s touched so many lives.”

Jacobs had been a teacher in the Elmont school district before becoming legislator. Other accomplishments include her involvement with the Syosset Homeowners Against Pollution of the Environment and with the Residents Against Garbage Expansion. She also did her part to combat breast cancer, heart disease and Crohn’s and was a member of the League of Women Voters.

But no matter how lengthy her list of accomplishments, it’s the appreciation she garners from those she’s worked with that’s most impressive.

“Judy Jacobs was an extraordinarily legislator and the kindest person I knew,” said Town of North Hempstead Supervisor Judi Bosworth. “She mentored me when I was first elected as a legislator. She has been and continues to be a role model to me. Judy always had the best interest of her residents at heart and knew how important it was to work in a bipartisan manner. I took this page from her book when I became supervisor. I am just heartbroken over her passing.”

A Woodbury resident for more than 40 years, Jacobs leaves behind three children, nine grandchildren and an undeniable passion for health and sanitation.

“Dedicating my life to the people and communities of Nassau County over the past 20 years has been an extraordinary experience,” she told The Westbury Times in 2015. “Our communities are safer, healthier, and more vibrant than ever before, and I feel privileged to have partaken in the policymaking that has enabled our community to flourish.”

Fener believes that her influence will be lasting and that Nassau County will be in good shape going forward. He says this is due to Jacobs’ ability to impart her ideas to others and to the way she demonstrated that to her, her job meant something much more.

“She would take junior legislators under her wing and show them how important it was to get feedback on the community from the people,” said Fener. “And now they all understand that that’s part of the job.”