Calling Steve Vai a virtuoso is the epitome of an understatement. Ever since heading out to California fresh out of the Berklee College of Music in 1979 and cutting his compositional teeth playing and recording with Frank Zappa, the Carle Place native has followed quite the convoluted creative path.

Vai was beyond thrilled with how the tour went and as far as he was concerned, Generation Axe was, “…a beautiful potpourri of flavors hitting you in the face—it was just a great show. If you’re a guitar lover, you may have thought that it was just going to be a big wankfest, but there was just so much dimension with what everybody did. It was beautiful.”

Vai recently came home as a special guest on lifelong friend Joe Satriani’s G4 Experience guitar clinic, which was held at the Glen Cove Mansion. Vai popped in for one day, where he guested alongside fellow guitar whizzes Eric Johnson, Testament’s Alex Skolnick and longtime Satriani sideman Mike Keneally. Satriani is also Vai’s former teacher and not unlike his fellow Long Island native, he’s also gone down an educational path hosting his own Vai Academy on the West Coast. The next one will be held from Jan. 2 to 5 in Carmel, CA and like G5, it will also have guest instructors. 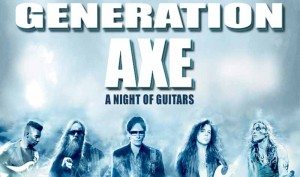 “It’s going to be at this beautiful resort. I have confirmations for the people that will be joining us. I don’t know how it can turn out because we’re still in the formulation stages. Joe Satriani is going to be joining us and Al DiMeola, if you can imagine that. How cool is that,” Vai explained “Also Carlos Alomar and we’re working on another. I love these camps because it’s a great opportunity to talk to these kids that are eager and hungry and looking for all sorts of information and inspiration. And my camps in the past have been theme-oriented.”

The initial camp included topics ranging from the soup-to-nuts construction of writing a song and copywriting, recording and mixing it to learning how to get it out into the world and promote it. Later courses found Vai bringing in luthiers to come and talk about body shapes, wood and necks. The one constant has been the array of great artists that have taught and played at Vai Academy along with endless opportunities for students to learn while jamming and playing with each other and their instructors. This year’s topic will be “Technique and Beyond Technique.”

As a devotee of meditation, spirituality and the metaphysics writings of Eckhart Tolle, Vai was very circumspect in citing a degree of kismet having a hand in his recent appearance at G5.

“Joe and I are joined at the hip throughout our whole career and lives, ever since I was 12 years old. What a beautiful lesson to have in life. It’s so funny because I was thinking that I’d love to just pop into Joe’s camp for a little while one of these years and just kind of be there for the fans and for Joe. But it was just a little scene in the back of my mind. And the oddest thing—the universe provides—a week later I get a call asking how I’d like to join the camp,” he said. “You put it out there with good intentions and things just happen. If you look back at your life, you notice that’s the pattern of the universe. Whatever you’re truly feeling inside manifests.”