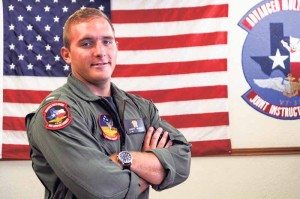 Wengler is a student pilot with the “Wise Owls” Training Squadron (VT-31), based in Corpus Christi, TX, that operates the T-44A Pegasus aircraft. As a student pilot, Wengler is responsible for learning how to safely operate the aircrafts to complete missions in support of the country.

“The best part about being a pilot is the flying and being the eyes and ears of the Navy in the sky,” Wengler said.

After graduation, pilots continue their training to learn how to fly a specific aircraft, such as the Navy’s F/A-18 Hornet strike fighter jet, the P-8 Poseidon maritime patrol aircraft or the SH-60 Seahawk helicopter. They are later assigned to a ship or land-based squadron.

Many of the pilots will fly aircrafts which take off from and land aboard aircraft carriers, a unique capability which allows the Navy to operate anywhere on the world’s oceans. Recently, Navy attack aircrafts operating from aircraft carriers sailing in the Eastern Mediterranean Sea and from Middle East waters have launched hundreds of strike missions against terrorist targets in Iraq and Syria.

As a member of one of the U.S. Navy’s squadrons with the newest aircraft platforms, Wengler said he and other VT-31 sailors are proud to be part of a war-fighting team that readily defends America at all times.

“This command’s climate is really good,” said Wengler. “The instructors are great, they hold us to a high standard and really push us to be the best.”

Jobs are highly varied at VT-31, according to Navy officials. Approximately 69 men and women officers and 15 civilian employees make up and keep all parts of the squadron running smoothly—this includes everything from maintaining airframes and engines, to processing paperwork, handling weaponry and flying the aircraft.

“Every day I feel an extraordinary amount of pride to serve alongside our great nation’s most inspiring men and women,” said Cmdr. Samuel D. Gage, commanding officer of VT-31. “Our team is filled with hardworking and highly qualified professionals who hold uncommon levels of responsibility and accountability in support of our mission: to maintain, fly, and train future naval aviators. Their work ethic, commitment, enthusiasm and esprit de corps are second to none.”

Serving in the Navy, Wengler is learning about being a more responsible leader, Sailor and person through handling numerous responsibilities.

“The Navy has taught me how to be a team player,” said Wengler. “I understand how my actions affect others and how to work together to complete a common goal.”

—Submitted by the Navy Office of Community Outreach