Here’s your geography quiz for the month: where is Suriname? If you’re like most people I asked, your first answer would have been Asia and then you might have guessed Africa.

Suriname (formerly Dutch Guiana) is located in northern South America and centuries of conquest, colonization and settlement have made this small country of only half a million people one of the most diverse in the world, starting with the early Arawaks who were conquered by the Caribs. You’ll find lots of Dutch influences—Suriname was a colony of the Netherlands until the 1970s—as well as flavors from East Indians, Africans, Indonesians, Chinese, Portuguese Jews, Lebanese and Native Americans (Amerindians).

Lucky for me, with our diverse Westbury community, just a few blocks from my home are two people of Surinamese descent who introduced me to the cuisine—Siela Bynoe and Glenn Wijngaarde. Bynoe, who is executive director of the Huntington Housing Authority and a Nassau County legislator, moved to Westbury as a child with her family. Her father’s great-grandfather was originally from Barbados but then migrated to Suriname; her mother’s family is from Nevis and Anguilla.

The Bynoes were the first West Indian family on the block and Bynoe says they felt welcomed by all their neighbors. She recently discovered her neighbor Glenn, who moved to Westbury six years ago, when she was canvassing for her run for the legislature and recognized his surname Wijngaarde (pronounced “wayne harder”) as Surinamese. As seems to be the case with people from relatively small places, everyone is somehow connected to everyone else. It turns out that Wijngaarde’s son’s godmother is a friend of Bynoe’s aunt.

Wijngaarde, who works for NYC Health + Hospital Corps at the Cook Chill Plant, overseeing food operations and delivery to all city hospitals, was born and raised in Suriname. Wijngaarde’s rich heritage includes ancestors who were Dutch, Sephardic Jews, Native Americans and Creole. He is a fount of information about the country where he was raised and would make a good member of the Suriname Tourism Board. As he described showering in the rain as a child and how the water and air feel different, it made me want to hop on an airplane.

Wijngaarde volunteered to do the bulk of the cooking. Cooking has been an interest since childhood, when he learned at the side of his aunt. He made two dishes: pindasoep (peanut soup) and moksi alesi, which means mixed rice. The peanut soup is reminiscent of West African dishes and was possibly introduced by the African slaves who worked on the plantations. Moksi alesi also originated with slaves and was made with leftovers from the day. “The slaves had to make due with whatever was available,” said Wijngaarde.
Wijngaarde has promised that any time I want to try other dishes I should just give him a call. I’m making a list: pom—a popular celebration dish of chicken citrus juices and an indigenous root vegetable called tayer that has Jewish and Creole origins; Japanese-inspired goedangan—a partially cooked mixed vegetable salad that is served with a dressing of coconut cream, lime juice and yogurt; and Native American yucca bread. Then there’s pastei, a chicken pot pie; bakbana, fried plantains with peanut sauce; and bojo cake, made with coconut, cinnamon, cassava and rum. I think I’ll pass on the paper watra, which translates as pepper water. 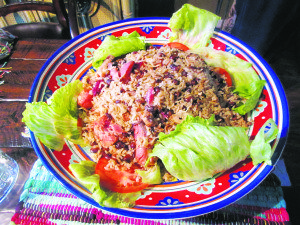 Marinate the chicken with a bit of black pepper and salt, then sauté the chicken, smoked turkey and salted beef slightly. Remove the meats and then sauté the onion and tomato. Return all the meat to the pot and add the celery.
Add the coconut milk and water and keep stove on med/high.
Add the okra and let it steam for about 5 to 10 minutes; remove the okra.
Add the pigeon peas and some black pepper to taste.
Add the 3 ½ cups of rice.
Cover and let simmer; with a wooden spoon turn everything a few times, until the liquid dries up (about 20 minutes).
Add the 2 Jamaican peppers on top.
Lower heat to low and cover; let it all steam for about 30 to 40 minutes or until the rice is fully cooked. Just before the rice is cooked, return the okra to the pot.
Serve warm and topped with some fried ripe plantains. 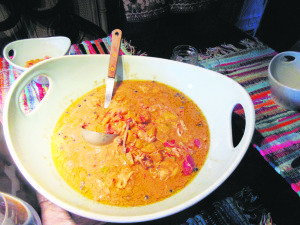 Start a soup base by bringing the water to a boil; add the chicken and Maggi cube. Add tomato, onions, celery and allspice; let it all simmer for about 40 minutes.
Then take some of the hot base and mix the peanut butter to make a paste; then add that to the base. Continue cooking it on low/medium heat for another 30 minutes; 15 minutes before it’s done, add green and yellow plantain, as well as the Jamaican pepper.
Serve in a small bowl and add white rice if desired.