The biggest mosque on Long Island just got bigger. The Islamic Center of Long Island (ICLI) recently finished a $5 million project to create a 19,000-square-foot addition to their existing building, which includes new classrooms, a weight room and multipurpose room, open for community use.

The center is still waiting final approval of their interior emergency lights (which will be done after Ramadan), but is hoping the new addition will be open for public use by end of July, with a ribbon cutting in August.

“Hopefully people like it. We’ll be open to the larger community if they want to hold meetings here,” said Habeeb Ahmed, president-elect of the ICLI. “We’re looking forward to that.”

The project was first proposed three years ago, but met with initial resistance from local community members, who said that a three-story building would not be in line with the residential nature of the area. After several meetings with the Islamic Center, immediate neighbors and village mayor, the center agreed to build a two-story building with a basement and subbasement.

“It cost more money to build underground, but to keep the community happy, we said we’d be happy to do that,” Ahmed said. “It was important to us because neighbors have a lot of importance.”

At the neighbors’ request, the Center also dropped plans to have a symbolic minaret placed at the corner of Brush Hollow Road and Talbot Drive.

Betty Hylton lives on Franklin Street and was one of the neighbors initially against the project. She said she’s not as affected because she lives behind them, but is waiting to see the inside.

“It’s much larger than we imagined,” Hylton said. “We are waiting to see the entire thing so we can see the full picture.”

The Islamic Center tore down two houses they owned to increase parking from 33 to almost 90 spots, which will help alleviate street parking. The renovations also include an open courtyard.

Ahmed said the new center will not be used for prayers, but instead will mostly house the pre-K school for three- to five-year-olds and offices. Twelve new classrooms were added, as well as several offices and a library. The basement features a kitchen, used to store and heat up food during events, and there is a multipurpose room/gymnasium in the subbasement.

Ahmed said that the expansion will help the center continue to meet the needs of not only their 550 members, but the community at large. They are hoping to have a health fair in September and they also plan to hold their annual Black History Month event in the new building.

Holding community events and being a helpful part of the village is especially important to the center. They’ve adopted Brush Hollow Road and every 15 days, a group from the center cleans up garbage from Prospect Avenue to the Northern State Parkway underpass. They also maintain a garden at the intersection of Jericho Turnpike and Powells Lane. Ahmed said that the center encourages its members to contribute positively to society, in part to help dispel fears and misconceptions about Islam.

“Nowadays, there are people who have created an industry out of talking about Muslims in a very negative way all the time. We decided, we’re part of the community, let’s get involved,” Ahmed said. “Let’s be good neighbors and show we’re part of the fabric here.” 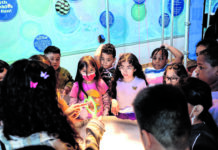