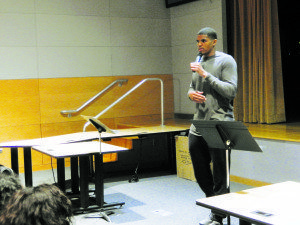 Westbury High School students got a special visit from NBA player Tobias Harris last week, who spoke to student athletes about setting goals and how he achieved his dream of playing basketball professionally.

Harris, who is currently a forward on the Detroit Pistons, shared how he faced constant criticism throughout high school and college from people who told him he would never make it to the NBA.

“I had so many people who told me I would never be a Division 1 player. When I made it to University of Tennessee, there were critics who told me I would never make it off the bench,” said Harris, who was drafted by the Milwaukee Bucks in 2011 before being traded to the Orlando Magic in 2013. “I worked my tail off every day. I did all the things that prepared me to be a better person and go to the NBA. That was my goal.”

Harris, an Islip native, told students that he often declined invitations to go out with friends, focusing his efforts on becoming the best basketball player he could be. He encouraged them not to be distracted, but to make plans to accomplish their goals.

“You have to be a leader. You can’t be a follower,” Harris said. “You have to lead your own destiny and you can achieve your own goals.”

He also shared the importance of taking chances. He shared how when he was up for a contract extension with the Orlando Magic, he took a gamble and declined the team’s initial offering of $38 million. They returned with a $64 million offer.

“I took a gamble on myself and my career,” Harris said. “Sometimes in life you have to take a gamble. You have to have confidence in what you can do and achieve.”

Approximately 75 student athletes in good academic standing attended the session. Last summer, Harris held a basketball camp at the “Yes We Can” Community Center in New Cassel for athletes in the Town of North Hempstead. He’ll be running the camp again this August.