Denisha West has a long list of accomplishments. She is the 2016 valedictorian, president of the National Honor Society and treasurer of the Spanish Honor Society. The Westbury High School senior recently added another title to her resume, taking home the crown as state champion for triple jump.

West began triple jumping in ninth grade, but at first, the track event had no interest for her. 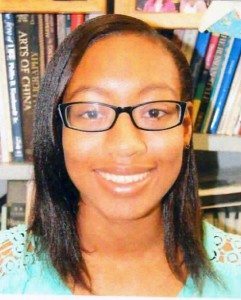 “My coaches taught me how to triple jump, I didn’t want to learn at first, but then I started liking it,” West said.

The triple jump—a track and field event in which competitors attempt to go as far as possible by performing a hop, step and then a jump from a running start—is not an easy task. It’s very physically demanding, and takes a lot of coordination, speed and balance.
West, who also swims and does outdoor track, said she loves the feeling of being in the air.

“It’s like you’re defying gravity,” West said. “As soon as I reach my breaking point, I hit the last jump and go in the air, it’s the best feeling. My body feels good, my mind feels good, and I feel free.”

This was West’s third time at states. She said she went into the competition in Ithaca with an open mind, knowing that anything could happen. She jumped an impressive 38 feet and a quarter to take home the title of state champion.

Track coach Darin Harrison described West as a huge asset to the team.

“She’s a hard worker,” Harrison said. “She brings a sense of calm, a sense of dedication. She’s a pleasure to be around and humble. It’ll be a big loss next year when we don’t have her.”