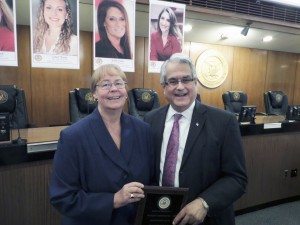 One of those recipients, Rebecca Bell, EAC Network’s former vice president and COO, received the Pathfinder Award for her humanitarian work with agency. The award, presented by Hempstead Town Supervisor Anthony Santino, recognizes Bell’s positive impact on the community.

Bell began her career at EAC Network in 1979 and spent 37 years with the organization as a force for change. She initiated many of the agency’s programs still operating today, such as Supervised Visitation and Senior Respite. Last year, after recognizing that a large percentage of EAC Network’s clients had difficulty accessing healthcare, Bell spearheaded the organization’s involvement in improving access to cost effective, quality healthcare for poor and at-risk individuals by coordinating primary, acute, behavioral health and long-term services for people with Medicaid, which became the Health Home Care Coordination program.

Although Bell has retired from her position as vice president and COO, she currently serves as a consultant for EAC Network and her dedication to the organization and the community remains steadfast.