With the season on the line, the Hofstra Men’s basketball team looks to capture the Conference Title for the first time in the Colonial Athletic Association (CAA).

The tournament will take place at Royal Farms Arena in Baltimore, MD, from Friday, March 4, through Monday, March 7. Hofstra seeks to avenge their heartbreaking loss last year to William & Mary in double overtime. William & Mary’s go-to player, sophomore Daniel Dixon, nailed a clutch three-pointer with 0.8 seconds left in the double overtime to send the Pride home. However, the Pride has been on fire this season and their players are stacking up points, rebounds and assists. Star Pride player Juan’ya Green is one of only four players in NCAA history to notch more than 1,000 points from two different schools. He also averages 7.1 assists per game. Green’s close friend, Ameen Tanksley, is the 33rd player in program history to tally more than 1,000 points. He scored 1,668 career points and 1,008 Hofstra points during his two seasons with Hofstra. Another weapon of attack for the Pride is Rokas Gustys, who has 18 consecutive double-doubles and racks up 12.7 rebounds per game along with 13.7 points per game.

Head coach Joe Mihalich feels that his team is ready to begin the CAA tournament and is proud for what they have achieved.

According to Mihalich, the way his team responded after two grueling losses to UNC-Wilmington and to James Madison in overtime is a way that a championship team responds.

Mihalich feels the team is slowly progressing since he took the assignment as head coach.

Mihalich stressed one major key element that he will address to his players prior to the first round of the tournament: It’s vital to pat down the technical skills offensively and defensively. 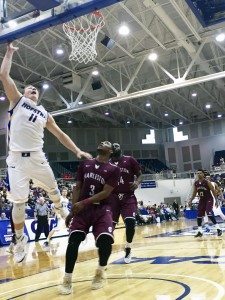 The Pride has been preparing all-year long for these upcoming three games.

“We are ready, we have shown all-year long that we are the best team…let’s go out and prove it,” said the head coach.

However, Mihalich strongly believes that seven teams could win the tournament and he emphasized that his players need to play exceptionally well these three games to punch a ticket to the NCAA tournament for the first time since 2001.

The preseason player of the year, Juan’ya Green, who is being scouted by the NBA for a potential draft, is certain that this is the year for dreams to come true. With his last season as a Hofstra player coming to a close, he’s ready to face the ultimate challenge and take down his opponents in orderly fashion.

Green said he is always in attack mode, he gets his teammates involved, and his passing helps them achieve victory.

“This tournament means a lot to me…I know my last days are coming in college and I know every minute and every second of games and practices plays a part,” he said, adding that he will cherish every day of his remaining college career.

Mihalich said fans should be expecting the same team they have been all-year long at the tournament.

“A team with a lot of pride, a team with great heart and great character…and a team that really represented the university to the highest degree,” said Mihalich.