The annual pageant spotlights women over 60, who positively exemplify what senior women can accomplish through their talents, abilities and achievements. Darkeh, who has no previous pageant experience, first heard about the competition from a friend. 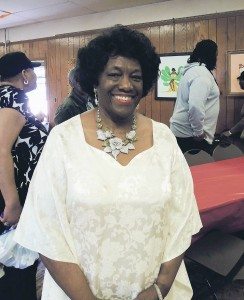 “A friend told me I had to be a part of the pageant. I didn’t even know what it was,” Darkeh said. Her friend submitted her name and while she was initially hesitant about the idea, her daughters encouraged her to participate. “I like to take risks and do different things. This is something I’ve never done before so I thought, why not, let me see what it’ll be like.”

Darkeh was chosen out of 30 women who were interviewed for a coveted spot in the pageant. On Sunday, April 3, at Hofstra University, she will compete against 10 other women from Long Island and the city for the title of Ms. New York Senior America. The winner of the competition will go on to represent New York in the national Ms. Senior America pageant. All contestants can also go on to join the Cameo Club, which promotes the goals of active living after 60, as well as perform at senior centers, hospitals, malls and more.

The pageant contestants will be judged on four categories: the interview, their philosophy of life, evening gown (which Darkeh is making herself) and talent. It’s the talent portion that Darkeh said she is most looking forward to, as she plans to read a poem she wrote. This will be the largest audience Darkeh, who has her own book of poetry and also holds poetry workshops, will be sharing her work with and she said she was excited to hear the reaction to her poem, “Who Said You Can’t Have It All?”. The poem tells the story of a woman trying to juggle family, community service and a professional life. It’s a poem that rings true for Darkeh, who took care of her family, as well as had a successful professional life as an entrepreneur and on the boards of several different organizations.

“Toward the end [of the poem], I get to the point that I was so tired, and the reason was because I forgot about me. But I was still standing tall and having it all,” Darkeh said. “It’s not just my story, it’s the story of women, especially today’s women who have to work and do everything and ask, can I have it all?”

Darkeh is an active member of the Westbury Senior Center as well as parliamentarian for Sisters of the Art, a group that supports young people who are interested in the arts. She said her participation in community organizations and projects has helped keep her young. She said win or lose, she’s excited to be a part of the pageant.

“For me, this has been a rewarding experience,” Darkeh said. “I’m looking forward to it with enthusiasm and I’m going to enjoy it. That’s primarily it.”