With St. Patrick’s Day approaching I started thinking about Irish soda bread so I went to the most Irish person I know to get a good recipe and learn about Irish cuisine.

Joan Boes, a long-term Westbury resident who is the village’s deputy mayor, thoroughly embraces her Irish heritage. Although she was born in Newark, when she was nearly five years old, her parents brought the family to their homeland for a holiday and they stayed for six years. 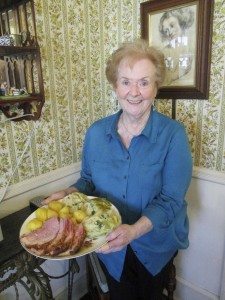 They lived with her maternal grandparents in a house that was half pub and grocery store and half home in Rathowen in the Midlands, a village of 28 houses. Her grandfather was also a blender of Irish whisky and a bottler for Guinness. “In the summers, we left the ‘big city,’” said Boes, and they went northwest to Ballyglass, the village of her paternal grandparents where there were six houses.

Although Boes’ father had to return to the U.S. to find work, this was an idyllic time for the children. Boes excelled in step dancing, earning eight medals. At Sligo, the children played in the river where the salmon ran and explored the acres of peat bogs, an area she described as a walk on the moon. And the food everywhere was wholesome and delicious. Meals were cooked in a large fireplace, similar to what you might see at Old Bethpage Village. One granny had a dairy and an uncle was a butcher. “This was real farm-to-table,” said Boes.

I was expecting to have corned beef and cabbage but was told that’s not really a traditional dish from the homeland where the beef would not have been corned. “In Ireland, if you killed it, you ate it,” said Boes. “We never saved it.” Instead there was cabbage and potatoes with a buttery sauce with parsley. She made the tradition Irish breakfast, also known as Ulster Fry, consisting of bangers (sausage), rashers (bacon), blood pudding, tomatoes and fried eggs. We enjoyed boiled Irish bacon—a special cut of pork (that she buys at Butcher Block in Sunnyside) that is boiled and then baked. Dessert was a gorgeous raspberry trifle of pound cake, custard, raspberry jam and Jell-O and lots of whipped cream. 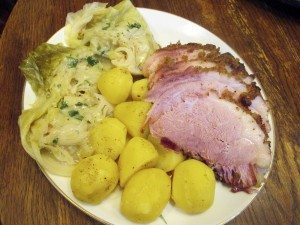 This year, as Boes watches the St. Patrick’s Day parade with all her cousins, it will be with special pride as 2016 marks the 100th anniversary of the Easter Rising, an armed insurrection that led to the end of British rule and the establishment of the independent Republic of Ireland.

“I listened to those stories all my life,” said Boes. “How grandfather hid people in whiskey barrels and how my mother’s sister’s husband was sent to prison.”

You can be sure when the family gets together, there’ll be Irish smoked salmon, which her cousin has flown in from Ireland, and soda bread, with butter, lots of butter.