When Larry Werther moved to Mineola in 1980, he wanted to get away from the big city feel and density of Queens and Brooklyn. However, Werther said the village has lost the small town edge that once made it so special, becoming overdeveloped and urbanized, or as he calls it, “LeFrak City East.”

“I hate the fact that we are urbanizing and putting up all these big developments,” Werther said. “I want to keep the little town feel. The village board has decided to turn my beloved village and suburban way of life into LeFrak City East. That disturbs me.”

Mineola’s recent development boom was one of the major motivators in Werther’s decision to run for village board, a seat he previously held from 2003-10. Werther will be running on the My Home Party and joins former mayor John Colbert, and incumbents Paul Cusato and Paul Pereira in the race for two open trustee seats on the board.

Werther said while he initially supported the Modera Mineola development, he sees the Village Green as a dangerous project that will “choke the downtown.” He was also disturbed to learn the developers had 20 year tax abatements.

“If the developer needs a tax abatement, I question their financial strength,” Werther said. “From my understanding, the Modera project is not only close to capacity, but had to raise the price of some of the apartments because there was too much of a rush on them. We’re making the rich richer at the expense of the people.”

He said while some trustees might tout the need for smart-growth in the village, he doesn’t think the village needs any more growth, especially if the properties aren’t helping bring down school taxes for surrounding businesses and homes. A former private client advisor at JP Morgan, Werther said he wants to find solutions that would put money back into the pockets of residents, instead of developers.

“One of the biggest expenses for anyone living in a village is the taxes,” Werther said. “If you apply the commercial tax rate, in my calculations, the Modera and Village Green should be putting in about 7.5 million in school taxes.

That’s eight percent of the entire school budget. That’s approximately $500 or more back in the resident’s pocket.”

Werther joined the board as a trustee in 2003, later assuming the role of deputy mayor. He became mayor in December 2010, to fill a seat left vacant by then-mayor Jack Martins, who was elected to the Senate. In the March 2011 elections, he ran for a trustee seat again, a position he served until 2013.

He said the current village board has lost sight of its primary responsibility to serve, only listening to feedback that’s in agreement with their viewpoints.

“They’re not here to govern or rule, they’re here to serve,” Werther said. “The mayor controls the board. We need to break the grip and get people who represent the village and want a suburban way of life.”

In addition to putting a moratorium to development, Werther wants to bring a Business Improvement District into the village, change the Jackson Steel property to single family residential zoning, restore the gatehouses in the Tudor section of Old Country Road and do a study on the feasibility of raising the wage of village workers.

“I think we’re paying too much for some things and we’re not serving our people properly,” Werther said, specifically pointing out legal expenses as a line item that could be cut. “We should be reevaluating what we’re paying our people. If they’re being underpaid, maybe don’t give them a tremendous amount but bring their salaries up to a livable wage.”

Calling himself a public servant, Werther said his goal is to save the small town feel of Mineola, and think of innovative ways to improve the village.

“There’s a certain pride that comes with living here and I think the village board is destroying that,” Werther said. “Mineola is a wonderful place to live, and I think we can save our village, but people have to turn out, and turn out in droves, to vote.” 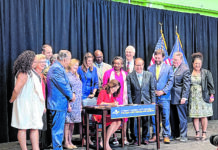