It’s been an interesting and unusual year in politics with the unexpected rise of Bernie Sanders and Donald Trump as presidential candidates. These timely, well researched and accessible books will enhance any reader’s understanding of the complex and fascinating world of politics. 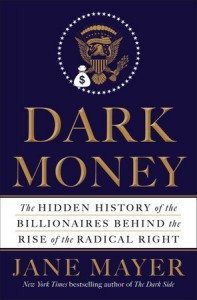 Dark Money: The Hidden History of the Billionaires Behind the Rise of the Radical Right by Jane Mayer (Doubleday, 2016). Author Mayer, who writes for the New Yorker, explains how a group of extraordinarily wealthy people with libertarian views have been funding tax free, nonprofit organizations that have influenced the political system for their benefit. The Supreme Court’s Citizen United decision in 2010, which allowed unfettered money for political contributions, has only deepened their effect on our democracy. This revealing and disturbing book is a must read to understand who these people are, what they have been doing and what the consequences will be for the rest of us.

Fun City: John Lindsay, Joe Namath and How Sports Saved New York in the 1960s by Sean Deveney (Sports Publishing, 2015). Mayor John Lindsey and Jets quarterback Joe Namath were both big stars in the ongoing show that is New York City. Both were handsome and confident and had a big influence in their arenas of politics and sports in the turbulent ’60’s. It’s fun to revisit that era with the author, especially because the decade ended with memorable championships for the Jets, Mets and Knicks. 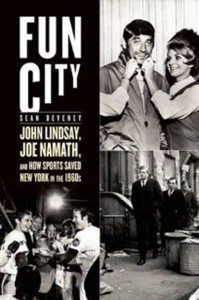 On His Own Terms: A Life of Nelson Rockefeller by Richard Norton Smith (Random House, 2014). A finalist for the Pulitzer Prize, this book took 14 years to research and write. Rockefeller, the grandson of John D. Rockefeller, the oil magnate, was a dreamer and a doer; by 30 had worked with his father to develop Rockefeller Center and with his mother to create the Museum of Modern Art. Later, as Governor of New York State he made significant contributions as a public servant, such as spearheading the expansion of the State University System. Rockefeller led a fabulous and fascinating personal and political life and was one of a lost breed of liberal Republicans.

Why the Right Went Wrong: Conservatism-From Goldwater to the Tea Party and Beyond by E. J. Dionne, Jr. (Simon and Schuster, 2016). A smart and fair analysis of the history of American conservatism and how it has influenced politics. This history will help the reader understand the major players, philosophies and growth of conservatism which as lead to an increasing impact on the current political system. Author Dionne is a Washington Post syndicated columnist.