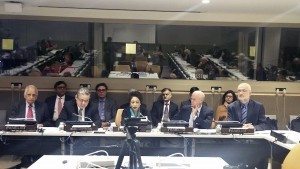 The Islamic Center of Long Island (ICLI) was invited to participate in an enlightening conference on xenophobia–islamophobia at the United Nations on Feb 4. ICLI, which is located in Westbury, was the only Islamic center from the country represented at the conference.

The presentation focused on the interfaith work ICLI has been engaged in for the past three decades and was very well received. The oral presentation was supplemented with a short video from the Oct. 25 launch of the interfaith institute of ICLI, a virtual tour of ICLI and its interfaith institute and brief excerpts from friends and supporters. The comments and discussion on xenophobia/islamophobia were lively and informative. It was interesting to hear the Canadian perspective from Dr. Munir Kassem, particularly the changes brought about with the election of the new prime minister, Justin Trudeau, and Canada’s warm reception for the refugees. This was followed by a global perspective from Dr. Bill Vendley who represented the United Nations.

Rabbi Jerome Davidson, a longtime supporter of ICLI, spoke in glowing terms about the impact and role ICLI has played in interfaith initiatives in the United States. There was robust attendance of ambassadors and staff from various Muslim majority countries, who were appreciative of the work being done at ICLI.

ICLI is delighted that the representatives from 56 Muslim majority countries represented by OIC at the UN know about the ground breaking work of ICLI and its interfaith institute, which has now been introduced to the global Muslim community, and received enthusiastically.
—Submitted by the Islamic Center of Long Island