In a landscape dominated by big box stores and retail chains, there’s something to be said for the novelty of an independently owned neighborhood establishment with a personal touch.

Carman Drugs of Westbury recently celebrated a milestone for a mom-and-pop pharmacy, opening their second location on Westbury Avenue in Carle Place on Dec. 21, 2015; the exact same day and month, five years ago, that their original store opened for business. 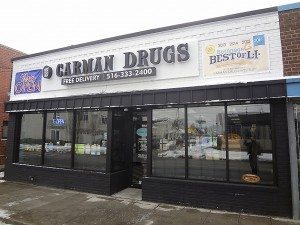 Carman Drugs was founded on Carman Avenue in Westbury in December of 2011. Due to the success of that endeavor, co-owners Tom Vassel and Rob Gally recently expanded the operation to a second store in Carle Place, which opened its doors several weeks ago.
Vassel, born and raised in Westbury and currently residing in Huntington, has been working in the pharmacy field since his mid-teens, starting out stocking shelves. He said he later took an interest in learning about what goes on behind the counter as well and that desire ended up very clearly mapping out his future career path.

“My uncle was a pharmacist. I was getting to the age where I wanted to decide what to do with my life, so I started asking him about exactly what it was that he did. It sounded interesting, so after high school I went to pharmacy school,” he said. “After graduating I worked at several chain pharmacies and the corporate world just got to me after a while. They cared more about the bottom line. It was a numbers game to them, it wasn’t about the customers.”

For a change of pace, Vassel started working part-time at a busy local neighborhood pharmacy—Westbury Pharmacy on Carman Avenue—located up the block from the home he shared with his wife while they were still living locally, and was taken aback at the vast differences he noticed.

“It was so different. To me, it was the way a pharmacy should be. It’s very family-oriented and the people working there know what they’re doing,” he said. “Plus, this was in my neighborhood, so I knew everyone that came in. It’s a different world altogether from the corporate, big box stores.”

When a management dispute threatened to close Westbury Pharmacy, Vassel partnered with fellow pharmacist and friend Rob Gally and the two took the business over in 2011.

“I really just didn’t want to go back to CVS, and it worked. They closed and we re-opened across the street under a different name,” he said. “Rob and I had known each other for years, working together, and owning our own pharmacy was just something that we had always talked about doing.”

“This used to be Maple Pharmacy. It was a staple in the community and we knew it well, so when it closed earlier this year we thought it was a great location. Rob and I have friends in the neighborhood who asked us to take it over so they wouldn’t have to go to Walgreens, so we decided to do it,” he said. “Response has been excellent. Everyone loves the store, and they love our products and our services. It’s been great.”

The differences between Carman Drugs and chain pharmacies are numerous, Vassel said. Item selection and insurance plans accepted are comparable to the big pharmacies while prices are more affordable, local delivery is available and service is always one-on-one and family-friendly.

Bringing a more personal, intimate touch to the local corner pharmacy is a goal that is altogether quite impressive in this day and age for an independent businessman and Vassel noted that he looks forward to passing his enjoyment of this achievement onto his customers and their families for many years to come.

“I had never thought of myself as a business person, but there was a weight lifted off my shoulders when we first opened up our own store. Whether I made more money or less didn’t matter, it was that I didn’t have to play that numbers game anymore,” he said. “Just do the best you can, make everybody happy. My customers are just the best people…down to earth, and that’s what makes it so great.”