Wes and Earlean did not have to look far and wide to find each other, nor did they have to wait long in life. They met in the early 1960s in Mississippi when Wes moved into Earlean’s town around the ninth grade. It was not instant attraction, nor did their relationship begin as friendship. 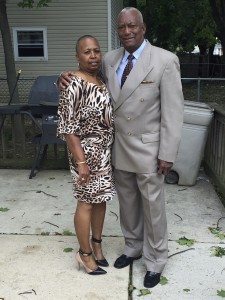 “We weren’t friends because he was new to my town, and back then you didn’t mingle too well with the out-of-towners. So he came into town and after a little while we finally decided that it was okay,” Earlean said, breaking into a laugh.

It turns out that they both shared a common love and talent as well.

“We went to high school together and we went to prom together,” she added.

After graduating from high school, Wes in 1962 and Earlean a year later, they moved north to Westbury where they have lived ever since. In stark contrast to the expensive Long Island extravaganzas of today, the young couple exchanged their vows in a simple wedding at the bride’s sister’s home on Oct. 4, 1964.

“It was small,” Earlean said. “Just family and friends. We had it inside. It wasn’t a big party.”

Stability marks the lives of this couple, both in their relationship and in their respective careers. Upon arriving in New York, Wes had a job waiting for him at Grumman in Bethpage where he would work on the assembly line for 28 years, and Earlean obtained a job at General Semiconductor in Westbury where she stayed for 46 years before retiring in 2009. After leaving Grumman, Wes got a job at Dryden Elementary School in Westbury where he has worked for the past 21 years. Wes is now itching to retire himself.

“I’m putting my papers in,” he said. “I do pre-kindergarten, four-and five-year-old kids. I’m gonna miss them because they’re so funny.

They’re very smart and notice everything about you. I know I’m gonna miss them, but it’s time to retire.”

When asked what he felt was the key to a long and happy marriage, Wes said “understanding.” He said he used to manage a women’s softball team, and would travel all over the country with them.

“Guys at work wanted to know, ‘how your wife let you go away with 15 women for six days?’” Wes recalled.

“Well, I trust him,” Earlean answered.

Wes and Earlean have one daughter and a 22-year-old grandson and a 26-year-old granddaughter. They all live within minutes of the Douglas’s home, so they always have time to see them. This is important to Earlean, who is close with her granddaughter.

“I spend my days now taking care of my granddaughter,” Earlean said. “She’s handicapped, so we go out, take the Able-Ride, go to the park.”

The couple is also longtime members of the First Baptist Church in Westbury, where they have faithfully attended since 1967. Earlean is a bishop in the church, and her and Wes are active in many church functions. They both grew up in church in Mississippi and credit their Christian faith as a crucial element to their long relationship and devotion to each other. Wes and Earlean could not think of any one occasion that is especially memorable in their lives together, but in over a half century of marriage there has certainly not been a shortage of memories.

“Nothing really stands out,” says Earlean. “We had a lot of good moments.”