A couple dozen hockey players left the ice Jan. 5 at the Town of Oyster Bay Rink in Bethpage, trudging to the locker room to take off their skates. A new wave of skate-less athletes filed in and unpacked their sleds, ready for some ice time of their own.

Informal salutations joyfully echoed the rink, as Long Island Sled Hockey, Inc. officially conquered the space. The collection of boys and girls as young as 9-years-old to grown men in their 60s, each with a physical or mental disability of some kind, prepared in haste for the bi-weekly hour-long practice that transports them to a place void of limitations.

“It’s very uplifting,” said Nick Capparelli, 63, an Oceanside resident with amyotrophic lateral sclerosis (ALS). “When you’re on the ice, you forget that you’re handicapped. Nobody complains, everybody is out there having fun.” 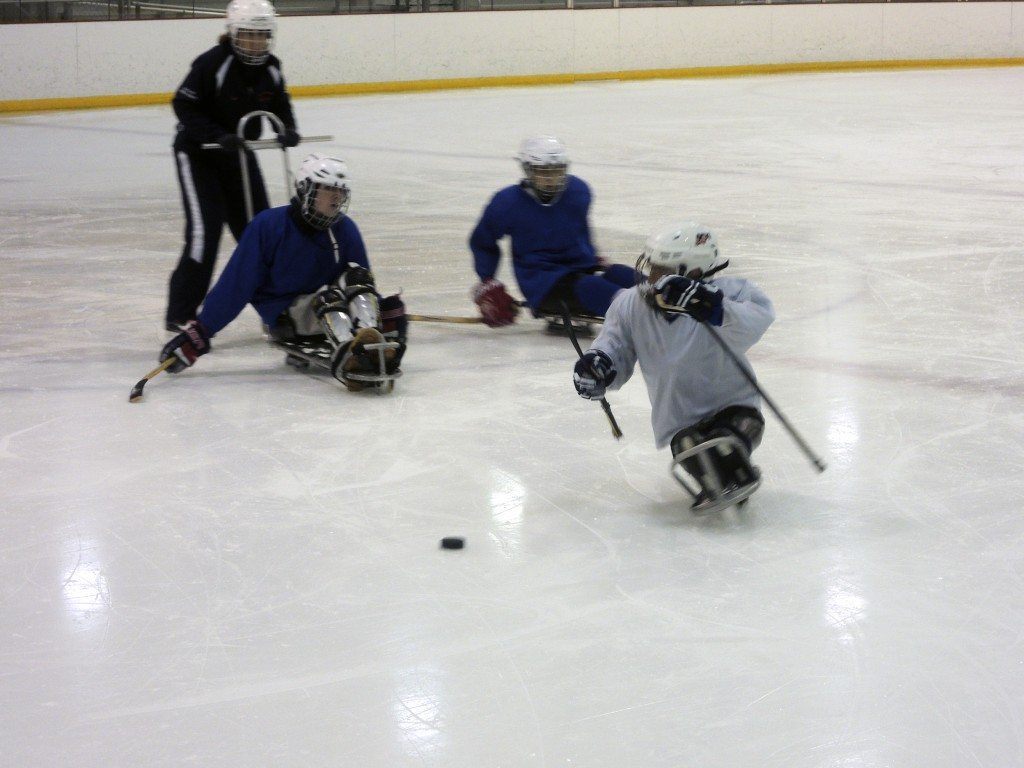 The Long Island RoughRiders is not just a sled hockey team that competes against other squads in the U.S. and Canada, but a family that started with 16 members and now has about 50, each with their own story.

While some become “differently-abled” later in life, others are born that way. Merrick resident Dan Santos has dealt with femoral hypoplasia his whole life, a syndrome in which you are born with small femurs.

“I always wanted to play hockey when I was growing up [but] didn’t really know how I could possibly do it with crutches walking around,” said Santos. “I found sled hockey and it’s been awesome ever since.”

Invented in Sweden in the 1960s, sled hockey carries many of the same rules as traditional hockey. Each player is sitting on what is known as a sledge, called sleds by most Americans. To move on the ice, they have a short sticks in each hand with blades on the top that can dig into the ice to help propel them forward. Though teeing-charging—using the front of the sled to hit an opposing player—is illegal, checks are allowed and some fights even break out.

The team has won 14 tournament titles, four silver medals and seven bronze medals since 2003 when Bryan Blomquist, 66, volunteered to take over as coach, failing to place in just four tournaments during that span. The RoughRiders have traveled to Albany, Massachusetts, Florida and Ottawa, Canada to compete and will embark on their trip to the London Blizzard Invitational in London, Ontario on Jan. 21. 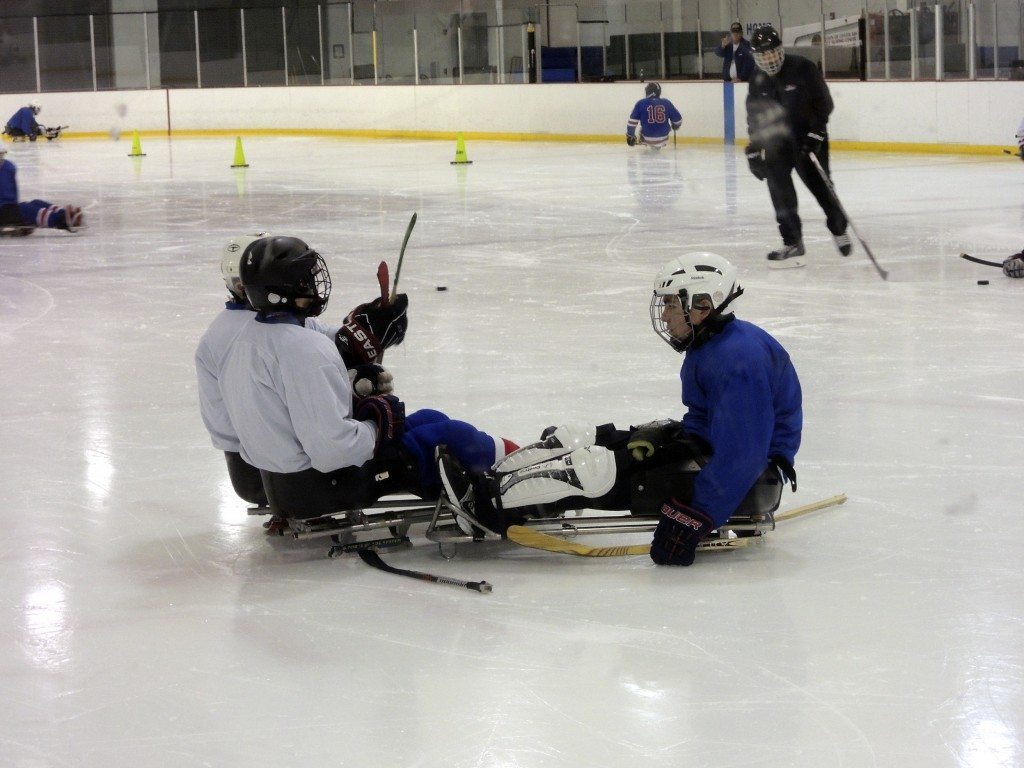 Long Island Sled Hockey also hosts the RoughRiders Cup and challenges varsity hockey teams to get in sleds and play them, including the Cadets at the United States Military Academy in front of a large West Point crowd every November. Despite the team’s frequent domination in those match-ups and the bevy of banners hanging in the Bethpage rink, Blomquist, a Vietnam War veteran and retired police lieutenant said that isn’t what the RoughRiders are about.

“You can’t put a price on smiles,” Blomquist said, who has a son with Down’s Syndrome on the team. “We measure success in smiles, not ribbons. In self-esteem, not first and second place. Did you have fun? Did you try as hard as you could?”

Those are the questions Blomquist cares about, and doesn’t ask many others when new people want to join the team. Instead of turning away mentally disabled players, he said he thinks the Rough Riders are the only non-profit in the country in which the mentally-handicapped make up about 25 percent of the program. 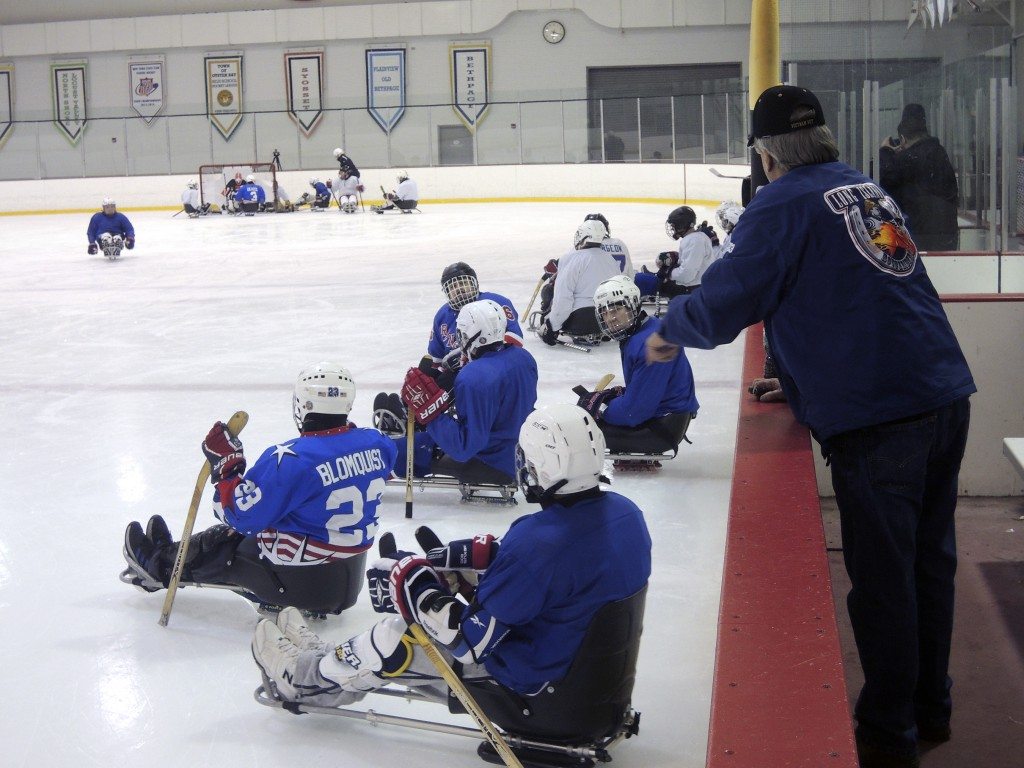 New members of all ages and talent levels are welcome. Michael DiPietrantonio, 17, has spina bifida, a condition in which there is an incomplete closing of the backbone and membranes around the spinal chord. He joined the team two years ago, and his mother Robyn has seen the many benefits.

“Everyone took Michael in immediately and they watch out for him,” Robyn said. “He was very introverted before and as soon as got on the ice, he took to it immediately and it changed his life. He’s more outgoing now, he’s happy on the ice and you can see the change in him.

The growing number of members meant last year’s costs eclipsed $350,000, but those expenses never make it to the athletes. Blomquist’s fundraising efforts—including a golf outing, a months-long television raffle and the “50s Sock Hop” dance every November—pull in most of the money, and two months ago, Blomquist announced at the major November benefit that he had raised $258,000 in 2015. His first year, he raised $14,000, which shows just how far the program has come.

“It’s not me it’s them,” Blomquist said. “They sell the program. All I ask people, come down and watch them for five minutes, but I want you to come for the last five minutes because I want you to see them get off the ice. This guy’s strapping on a leg, this guy is strapping on two. Eight guys are in wheelchairs…watch when they come off [the ice]. They’re all smiling.”