It’s not always possible to travel to places that intrigue us but we can always visit them through our imagination while reading. These well written and geographically rich stories are all set in Europe. Each delightful book allows the reader to escape as they experience different places and cultures with a compelling cast of characters. Check out these titles from the Westbury Memorial Public Library. 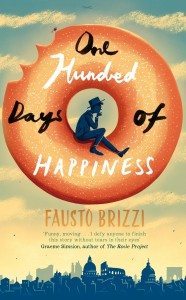 100 Days of Happiness by Fausto Brizzi (Viking, 2015). Lucio Battistine has been asked to leave home after cheating on his wife with a bimbo at the gym. Banished from his family, he is sleeping in the back of his father-in-law’s bakery in Rome when he learns he has inoperable cancer. Lucio spends the next 100 day working to win back the love of his wife and leaving things as best as he can before his end.

The Farm by Tom Rob Smith (Grand Central Publishing, 2014). Daniel thinks his parents will be having a quiet retirement when they return to live on a farm in his mother’s homeland, Sweden. Daniel receives a phone call from each parent which tell conflicting stories of secrets and crimes. Who can Daniel believe in this original and hypnotic thriller?

The Visitors by Simon Sylvester (Melville House, 2015). Flora lives on the tiny island of Bancree off the coast of Scotland where nature and the sea are ubiquitous in everyday life. In her final year of high school, Flora meets a new and mysterious friend and becomes drawn in to the disappearance of a number of local residents. This novel of psychological suspense will keep the reader on the edge of their seat.

The Whispering City by Sara Moliner (Pegasus Crime, 2015). This mystery is set in Barcelona in 1952 when oppressive fascist leader Franco was in power. Ani Marti, an eager young journalist, is assigned the case of a murdered socialite. She enlists the help of her cousin, Beatriz, a linguistic scholar, to assist in solving the crime, which appears to involve a gigolo and his client, but ends up being much more complicated then it seems.