“In Carle Place we have a lot of traditions and a lot of us former soccer players do our best to keep in touch,” said Danny Carlos, former

Carle Place High School soccer player and 2004 graduate. “This is the second time we’ve held this event and it is basically a reunion of sorts of friends and teammates. Guys come in with their families and after we’re done playing soccer we all head down to Manning’s Pub to catch up on old times.” 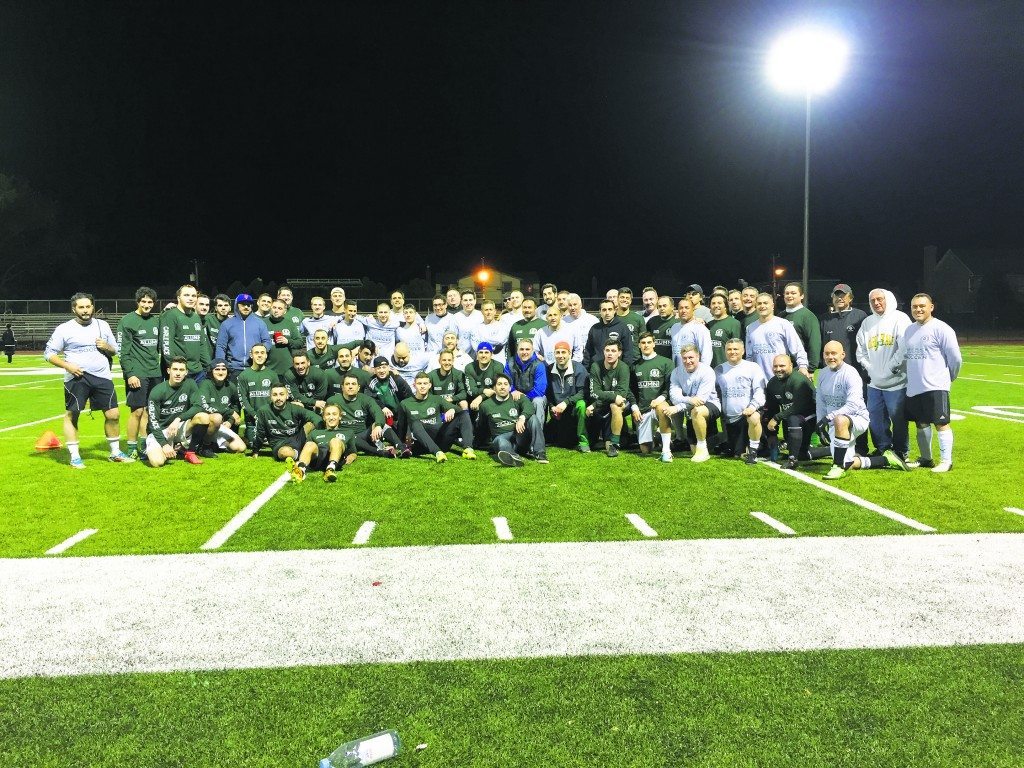 Carlos said that the first soccer tournament he organized was held in 2013 over the Thanksgiving holiday. That event had a decent turnout with 50 people coming down to play. The event on Oct. 30 had 67 former players taking the field to engage in friendly but competitive battles. There were a total of five teams and each team played four games. Scores weren’t recorded and team names included the ‘Hall of Fame,’ the ‘Veterans,’ ‘Prime Time,’ Franchise Tag’ and the ‘Rookies.’

“We have guys who graduated in 1985 all the way up to 2014 who came out to play tonight,” said Carlos. “People came in from out of state, all the way from Arizona and California to reunite with some of their old friends and teammates.”

Carlos said that the new turf fields and the newly installed lights were a great addition to the school and that playing under them was a pretty cool experience.

“They really did a great job here and it shows with our boys team heading to the Long Island championship after shutting out Wheatley on Wednesday. It is good to see the high school team doing good and we are here in support of them.”

John Marasco, a 1993 graduate of the High School, said that he thought the bi-annual tournament was a great idea and wants to see it become a tradition for a long time to come.

“All of the soccer guys have a bond with one another and this is a great way for some of us to get out there and kick the ball around again,” Marasco said. “It is also great to see some of our old friends and teammates.”