Shakespeare and mobsters sound like an unlikely mix, but the two join forces in the upcoming movie Friends and Romans, which filmed partially in Carle Place.

The movie’s original script was crafted by Jericho High School Class of 1988 alum Gregg Greenberg, who got the idea while he was casting parts for a production of his off off Broadway play, Clemenza and Tessio Are Dead, which was a re-working of The Godfather, in 2008. Throughout the audition process, he noticed there was a number of Italian-American actors who were typecast in movie roles, regularly playing mobsters and members of the mafia. That observation sparked an idea in Greenberg’s mind—what would happen to these actors at the end of The Sopranos, and as the era of the mob movie declined? 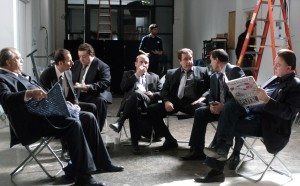 “I used that as the starting point of the film,” said Greenberg. “What happens to these wannabe wiseguys once this genre, like the Western, dies?”

Greenberg finished the script for the film in 2008 and for the next four years, kept pushing to get it made. But as it turns out, getting a script into the hands of Hollywood producers wasn’t an easy task.

“It was very, very hard,” Greenberg said on the process. “Hollywood is a tough industry to crack. It takes a lot of perseverance, but I thought the script merited the effort.”

He submitted his script to producers, film festivals and screenplay competitions, doing whatever he could to get someone to notice him. In 2012, he finally got the script into the hands of producer Michael Mailer and that’s when things began to take off. The independent movie producer took on the project and suggested Christopher Kublan, a Jericho High School Class of 1987 alum, direct.

Kublan, who has directed and produced films, commercials and music videos, said when he was sent Greenberg’s script, he quickly saw its potential.

“Ten pages in, I saw how smart it was and how great the jokes were,” Kublan said. “The whole idea of the script was smart and compelling.”
Michael Rispoli, a veteran actor in film and television, including The Sopranos, and a second-generation Italian American, was Greenberg and Kublan’s first choice when casting their lead character. Rispoli said he resonated with the character’s experience of being typecast and accepted the role, joining the creative team.

Once Rispoli got on board, the creative trio worked on fleshing out the script, adding characters and rewriting scenes to put together a screenplay. It was a collaborate process, said Greenberg, and the team came up with a smart, funny script that Kublan said turns typical Italian American stereotypes on its head.

The movie centers around Nick DeMaio (played by Rispoli), a frustrated Italian American actor who wants to rise above the typecasting that finds him and his thespian friends always playing the role of a mobster. When he and his friends decide to stage a production of Shakespeare’s Julius Ceaser, their late night coming and goings for rehearsals arouse the suspicions of federal agents, who mistake them for genuine mobsters using the play as a front for criminal activity.

And though it stars eight former Sopranos actors, Friends and Romans is far from a mob movie. It’s a comedy that seeks to show that people are always more than they appear. Through the writing and casting, it was important for Greenberg, Kublan and Rispoli to fight typical Italian stereotypes.

“In the casting, I consciously cast all the roles physically to type so that we see how different the characters are from their physical stereotype,” Kublan said. “It hits home that judging individuals based on appearance is a slippery slope that can lead to unintended consequences.”

Once it came time to film, the creative team was met with a different set of challenges—namely funding and weather.

The filming was split between Staten Island and Carle Place in the winter of 2013-14. Greenberg described it as a “stressful” process because bad weather often rescheduled shooting.

“We were held up by the weather a few times and had to change locations. We only filmed for about three weeks, but it’s not consecutive and it’s very difficult to shoot because you have to get everyone’s schedules to match up,” Greenberg said. “And you need to finish shooting within the time the actor is available, and not run out of money.”

Friends and Romans is being released by Paladin in select theaters across the country and on Nov. 6 will debut at Bow Tie Cinemas in Roslyn.

Friends and Romans is Greenberg’s first foray into the movie world, though he has also written two plays which have done well. A financial journalist by trade, he said it’s exciting to see something he’s worked on so long finally come to fruition.

“It’s exciting to finally get to see it on the big screen and get your friends and family to see it with you,” Greenberg said. “I come from the financial world and I’ve been calling this my IPO. I talk about this all the time in regards to Wall Street so it’s nice to see it in my real life.”

And as for doing more films? Greenberg said it’s definitely a possibility.

“After I recover from the making of this one,” he said with a laugh.