The lead no longer mattered. Nor did the clock. The handfuls of homecoming fans that paid three dollars already got their money’s worth and watched silently as the game came down to one play.

Westbury’s front seven stared down New Hyde Park’s big bodies, trying to make a play to salvage its first win of the season. Gladiators Quarterback Mark Chambers had other ideas, faking a hand-off and taking the ball himself from the 2-yard line to give his team a 13-12 lead with six seconds remaining. 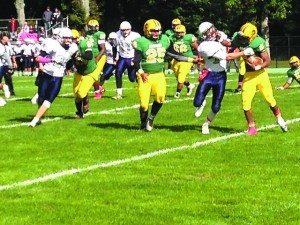 “[He] did it all on his own,” New Hyde Park head coach Kevin Dolan said about his senior quarterback on the deciding touchdown run. “He didn’t like what he saw and I told him, ‘If you think they’ve got you locked down, you’re a hell of a running back as well’ and he thought he had a crack, and had confidence in his offensive lineman.”

Two touchdowns in the second quarter gave Westbury a 12-0 lead at the half. The failed extra point and two-point conversion would hurt down the stretch, but spirits on the Green Dragons sideline were high following the touchdowns, starting with running back Michael Francis’ goal-line punch-in with 7:10 left in the half. Less than four minutes later, quarterback Viron Jones hit wide receiver Darrius Young who took the pass 27 yards down the sideline to extend the lead.

Early in the third though, Westbury was pinned deep at their own 1-yard-line. Though garnering some breathing room with some running plays, Jones rolled out, looking to connect with Young once again, as New Hyde Park junior Steve Chambers tipped up the ball near his own sideline to intercept the pass. 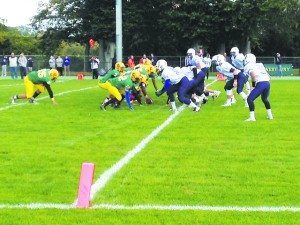 The next play, the Chambers brothers went to work, as Mark hit Steve for a 25-yard pass to set up a 5-yard touchdown run by running back Joe Gardella.

But Westbury would respond with a ground and pound philosophy, giving the ball to Francis as well as senior Tykim Anderson to eat up as much clock as possible. A nearly 10-minute drive brought the Dragons to the New Hyde Park 30, but they turned it over on downs when forced with a fourth-and-5.

With eight minutes left in the game, Westbury’s defense held strong, taking down the Gladiators’ signal caller for a loss on fourth down to get the ball right back with good field position.

The home team ate more clock, and things looked bleak for New Hyde Park after Anderson’s 20-yard run to the 6-yard line. Jones looked to the right sideline and let go a pass that was picked off, once again by Chambers. The clock read 1:43, and so began the 12-yard, game-winning, 94-yard drive. 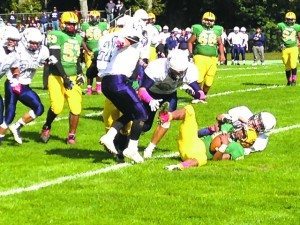 “They don’t bleed the clock, it was hemorrhaging, and you feel defenseless,” Dolan said. “You want to say, ‘Yea, we play this bend-but-don’t-break defense but actually doing that is mind-shattering and our kids were able to dig in deep and make the big plays when we had to.”

More big plays were still to come as a third-and-long preceded a successful fourth-and-1. Two plays later, Chambers aired it out to junior receiver Joe Langan for 40 yards, as waves of home groans and opposing sideline jubilance clashed for air time in the chilly afternoon wind.

Chambers would then hit his brother—who was 6-for-7 on the drive—on fourth-and-9 for 12 yards to set up the winning score and extend their win streak to four.

“Chambers to Chambers,” said Dolan. “They’ve got a little of that brother telepathy going on.”

Westbury falls to 0-6 on the season, having lost its last four games by three points or fewer. According to Green Dragons head coach Savalis Charles, recovering from the loss won’t be easy.

“It’s going to take some time,” he said. “This is a young crew and they fight hard and this is three games in a row we lost by two points [or less]. We haven’t won a game yet this season and to lose homecoming, it’s deflating.”
The last place Westbury squad plays Elmont (4-2) and Jericho (1-4) to finish the season, looking to take something positive into next season.

“Tough pill to swallow,” said Charles. “Keep your heads up, we’ve got two more weeks. Finish out the season and just try to finish strong.”