It’s been a great season for the Carle Place girls varsity soccer team. The team finished in third place and are headed to the play-offs, with their last game on Oct. 29. But it’s not just the hours of practice and experience that give the girls an advantage on the field. The girls agree that part of this year’s success can be attributed to the fact that they have five sets of siblings on the team.

“It’s the first time this has ever happened. It’s a unique situation,” said head coach Erik Tonner. “They all work well together. It’s not like there is sibling rivalry.” 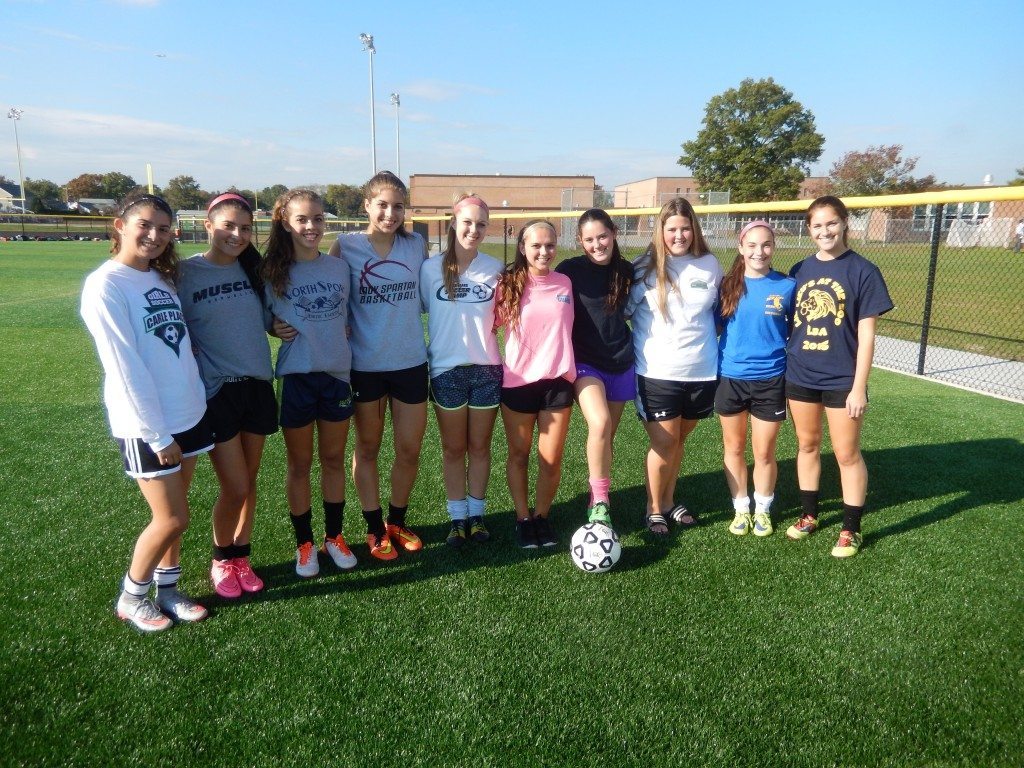 The girls agree; longtime players say that this year’s team seems closer than ever and communication is at an all-time high.

“This season in particular, because we have so many sets of sisters, it’s more of a family atmosphere,” said senior Carly Ackerina. “We’re all so close and that’s really helping with winning and with the team dynamic.”

All of the girls have been playing on travel teams since they were kids, and most of them come from soccer families. Kacey Burden got to play on the Carle Place varsity soccer team with her older sister, and now as a senior, gets to play with her younger sister, Leah, a ninth-grader. They agreed getting to play on the same team was a great experience.

“How many people get to share this experience with their sister?” said Kacey, a senior. “I think it’s good we get to spend all this time together and I cherish these moments together.”

The siblings share tips with each other and motivate each other to do their best. Ninth-grader Amanda Marasco credits her twin sister Gianna for encouraging her to stay with the game.

“I remember when I was 10 I didn’t want to play anymore, but she encouraged me,” said Amanda.

“We both encourage each other,” added Gianna. “And we give each other tips on what we can do better.”

There’s only friendly competitiveness between the girls, but the older siblings did admit to feeling protective of their younger sisters.

“When we play against other teams, I get so protective of [my sister] and I don’t even realize it,” said Kacey Burden. “It’s cool to look over and experience this and have her right next to me. It’s a learning experience for her so I always tell her I have her back.”

And while the sister-situation does set the team apart, Tonner said the team as a whole this year is strong and that they’re looking to win the conference title.

“They’re all doing a great job,” Tonner said of the team. “You don’t get to be first place unless everybody’s on the same page.”

Julia and Emma Beattie’s dad coached them when they were younger, but they never played on the same team because they are five grades apart. When they found out they would get to play on the same team in high school, they were ecstatic. Sharing the field has helped bring the sisters even closer together.

“Soccer has definitely brought us closer together,” said Julia, a senior who plays defense. “Especially with being in such as small town, it feeds off that because it’s so tight knit.”

“It’s a different experience because I get to play with older girls and that shows in my play. I’ve gotten stronger and better at getting around the girls,” said eighth-grader Emma, who plays forward. “Since [Julia] knows everybody I’m not so sensitive on the field. I know what to do and she helps me.”

Carly and Kiera Ackerina’s parents both played soccer, and this is the third year the sisters are playing together on the varsity team. Sharing that common experience has brought them closer, the sisters say.

“She tells me more about the mindset and we’ve gotten so much closer over the last several years,” said Kiera, a sophomore who plays forward, said. “She’s so smart and sweet so she knows how to bring everyone together.”

“Having Kiera on the team gives me a sense of urgency to succeed more and lead her on the right path,” said senior Carly, who plays midfield. “Even the girls we’re not related to, we’ve gotten closer to. We’re all working together and having such a good season this year. It’s something we can celebrate together.”

Freshman Leah Burden is right next to her older sister, senior Kacey, on the field. The two girls come from an athletic family and have two other sisters, so pickup basketball and soccer games were common growing up.

“It’s kind of tough because I know she’s better than me so I want to show off sometimes,” Leah said with a laugh. “But it’s good because you have someone looking out for you all the time on and off the court.”

“It’s cool to look over and experience this and have her right next to me,” said Kacey. “It’s a learning experience for her so I always tell her I have her back.”

Twin sisters Gianna and Amanda Marasco have been playing soccer since second grade, crediting their dad for getting them into the sport.

“It’s been really good because of the older people really accepting us,” said ninth-grader Amanda, who plays right midfield. “It feels like there’s a strong bond.”

“The sister bond keeps the team stronger,” said Gianna, who plays goalie. “We all know each other and that helps us play well.”

Emily and Sara Shevlin are part of triplets (their brother plays football). Emily is a left defender, while Sara provides support as the team manager.

“This is the first year she’s been on a team with me and it’s a really fun experience,” said Emily. “She’s great.”

“I like supporting her and usually I’ll go to her games but I wanted to be involved,” said Sara. “I think it’s fun.”