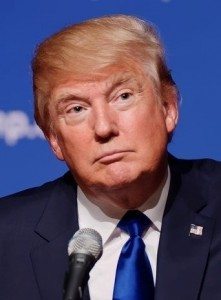 Trump’s campaign announcement that he wants to build a wall across the Mexican border is not a novel idea, but it is a very dumb one. The Mexican border spans 2,000 miles from California to Texas. Presidential candidates in the past such as Michele Bachmann wanted to build a fence across the entire border while former Texas Governor Rick Perry wants to use Predator drones instead.

George W. Bush signed the Secure Fence Act in 2006. It mandated the construction of 700 miles of barrier fences along the Mexican border. Some Presidential candidates have called for electrified fences.

The American public should consider Mr. Trump’s remarks in light of the Great Wall of China which measures 13,170 miles in length. The construction of the Wall was begun in 500 B.C. and completed during the Ming Dynasty in 1644. Only 8.2 percent of the Wall remains intact whereas according to China’s State Administration of Cultural Heritage 74.1 percent of the Wall is in poor condition. In some places only a foundation remains.

We need some specifics from Mr. Trump. How high and wide will his wall be? What substance will he use to build it —stones, bricks, cinder blocks or razor wire? What will the height be? What is the design? At what cost? Will he use day laborers or slaves to do the job? What is the completion date? Will it take more than 2,000 years to build? Will there even be a border or the need for one by the time it is completed? Is the Donald impersonating Davy Crockett and if so, is this his “last stand?” Shouldn’t he be holding press conferences at the Alamo? Should General Santa Anna’s heirs be asked for rebuttal time?

Alternatively instead of a wall we might consider a moat. We could use the Rio Grande for that and fill it with sharks and alligators. We could have the hunter from Missouri come out of hiding and instead of shooting at lions he could have target practice on migrants. Trump’s alternative to deportation is to build a massive sling shot to catapult illegal migrants back to Mexico. He will also have them working on just the Mexican side of the wall so that when it’s completed they will stay there.

Trump could have his border guards dressed in white sheets. In lieu of deportation, he could bring back tar and feathering or just throw some ropes over the trees and string them up, without trials of course.

Trump is way up in the polls. His popularity is bound to increase once he calls for human sacrifice of migrants at the top of his wall. Donald Trump then can be both the High Priest of his wall and President of the United States.