Eben-Ezer Haitian Baptist Church of Westbury will soon be seeing a major facelift.

The Town of North Hempstead Zoning Board of Appeals (ZBA) recently granted the New Cassel church approval to construct a new building at its existing location at 859 Prospect Ave. The church applied for the approval because their current building, which can only hold about 100 people, is growing too small for their growing congregation. 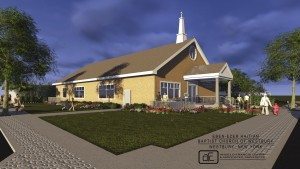 “It’s great because we’ve been waiting for this for a long time,” said pastor Duval Denis. “Not only when we have service, but when we celebrate the anniversary of our church in April and have the harvest festival in August, we can’t invite the sister church to come because we have no space to accommodate them. So this is marvelous.”

The design calls for the construction of a new 4,500-square-foot church plus a basement, which will be able to accommodate more than 200 people. The proposed building was designed by the architect, Angelo Francis Corva, and is expected to take about 10 months to build.

Not only will the new building allow the church the ability to better meet the needs of their congregation, but it will help them better serve the community as well. The church has a food pantry open every Friday from 10 a.m. to noon, and the expansion will help them serve the 40 to 60 people who come through their doors more easily. Denis said that the addition of a basement and cafeteria to the church also opens the door for the potential of a soup kitchen.

The Eben-Ezer Haitian Baptist Church of Westbury was established in 1984 to give Haitian immigrants living in the Westbury area a place to worship and to fill a need for a Baptist church in the area. In 1998, the church purchased the property on Prospect Avenue.

“We are pleased to have the North Hempstead Town Zoning Board of Appeals grant us this variance,” said Wayne Edwards, a partner at Sahn Ward Coschignano who represented the church before the ZBA. “Most of the congregants live in the New Cassel-Westbury area. Prospect Avenue has recently been undergoing a revitalization and construction of the new church will be in keeping with that redevelopment.”