Westbury’s Center Stage Music School is certainly no stranger to having its members rub elbows with fame. A few years ago a group of their violin students performed at the NYCB Theatre at Westbury with popular musical group The Piano Guys. But now the kids of Center Stage have upped their ante by appearing on hitRECord, a television show created by Hollywood actor and director Joseph Gordon-Levitt.

Gordon-Levitt, star of hit films such as Inception and The Dark Knight Rises, has often dabbled on the art and music scene on the side, creating hitRECord, a website where members can upload virtually any form of user-created media— music, art, video and more—that their fellow users can incorporate into their own unique creations. The website is tied to a television show of the same name on the channel Pivot, that highlights contributions from members of the hitRECord community.

Veronica Sanchez, director and co-owner of Center Stage, said that the moment she heard about hitRECord, she knew it was the perfect fit for the kids under her tutelage and endeavored to get them involved.

“They were asking on their Facebook page for video collaborations from music schools,” she said. “They were asking for schools to sing a musical chorus that they provided, and they said that the kids could dress up however they wanted.”

Since opening four years ago, Center Stage has featured cutting-edge instructors teaching numerous musical styles and a variety of musical instruments, including the violin, cello, viola, piano, voice, trombone and more. Sanchez said the talent pool was clearly there to create something sure to catch the eyes and ears of hitRECord.

“We filmed two videos with 14 of our younger students that we submitted to the hitRECord website,” she said. “One, where we dressed in hip, fun, colorful urban clothes and danced, and another one where the kids dressed very formally in black and white and were led by a conductor, and they sang the same hook in a very operatic way.”

Gordon-Levitt himself made the final selections of a small handful of music school participants from the hundreds of submissions received, with each of them being compensated for their work. When Sanchez received the email informing her that Center Stage had made the cut, she could hardly believe it.

“It was so cool, because this is an Emmy award-winning show,” she said. “That’s our goal at Center Stage…to be able to give our students these opportunities. We’re always looking for other ways to give them a platform to show off their talents.” 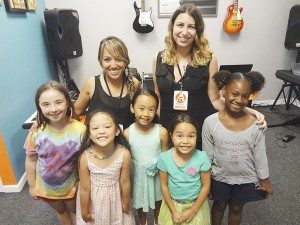 The Center Stage submission was mixed with the work and music of a number of participants into a rap-style video with a fun and lighthearted education theme entitled “Gotta Get Back to Class.” It aired on TV on June 26 and is available for viewing on the hitRECord website.

Isabella, age 6, one of the stars in the video, is clearly a virtuoso. She has been going to Center Stage for both piano and voice, and recently began to learn the violin.

“We had a lot of fun filming the video,” she said. “I didn’t get to see the video on TV, but I watched with my mom on her phone…I was proud for myself to finally be on TV.”

Westbury’s Neianna, age 8, has been with Center Stage since it first opened its doors. She’s been specializing in the violin the entire time and said that she really got a kick out of being on hitRECord.

“It was so much fun…we were all singing and dancing,” she said. “And then we changed into our fancy clothes and we acted out a skit where they rang the bell and we walked to the classroom and closed the door. It was so cool seeing me on TV doing stuff like that. I’d love to do it again.”