North Hempstead Supervisor Judi Bosworth and Councilwoman Viviana Russell visited the Westbury Senior Center on May 27 as the town formally recognized the month of May as Older Americans Month. Older Americans Month first began in 1963 after a meeting between President John F. Kennedy and members of the National Council of Senior Citizens, which led to designating May as “Senior Citizens Month,” the prelude to “Older Americans Month.  Through the senior program Project Independence, the Town of North Hempstead makes seniors in the community a priority so that they can live active lives and stay in their own homes as they age. 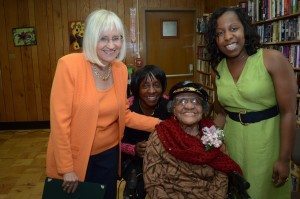