In 1992, she was going Christmas shopping and was crossing Broadway in Hicksville when she got hit by a car. She underwent several surgeries for her severe injuries, which included a broken leg, lacerated gallbladder and injured shoulder. She went to rehab, and though she still uses a walker, is in relatively good health. 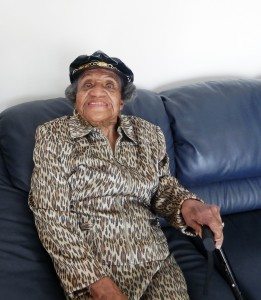 Over the last 100 years, the Westbury resident has traveled extensively, raised her daughter, was a devoted wife and played an active role in the community and her local church. She recently celebrated her 100th birthday, and local officials, organizations, friends and family joined Bonner in celebrating the milestone event. She received a proclamation from the Village of Westbury and was also honored by Nassau County Executive Ed Mangano at an event at Old Bethpage Village Restoration.

Bonner was born May 21, 1915 in New York City. She was the ninth of 10 children and was always seen as the baby of the family. She was married to her husband George on New Year’s Eve 1941 and in 1957, the two bought a plot of land in New Cassel, building the home where she still resides.

She worked as an inspector for Designs Power in Westbury and was involved with the Mercury Project, retiring at age 62 in 1977. After retiring, she helped take care of her husband who suffered from Alzheimer’s until he passed away in 1979. She then enjoyed spending her time at the Westbury Senior Center where she enjoyed exercise and creative writing classes. She also enjoyed tap dancing until she was 85 years old.

Helen said she credits her religion and the care of her daughter Sharon for her long life.