Westbury Middle School students got to look to the future of transportation by participating in Brookhaven National Laboratories’ MagLev Contest at the Cradle of Aviation on March 26. This was Westbury’s first time participating in the contest, and they made quite a name for themselves, taking home three medals.

The contest called on students from all over Long Island to develop “MagLev” vehicles, which float over a fixed track, supported and driven by magnetic fields. Students used math, science and technology to come up with the design of their car, and competed in five categories. The vehicles were judged on several factors, including speed, cost and how many “passengers” (which were represented by pennies) the vehicle could hold. 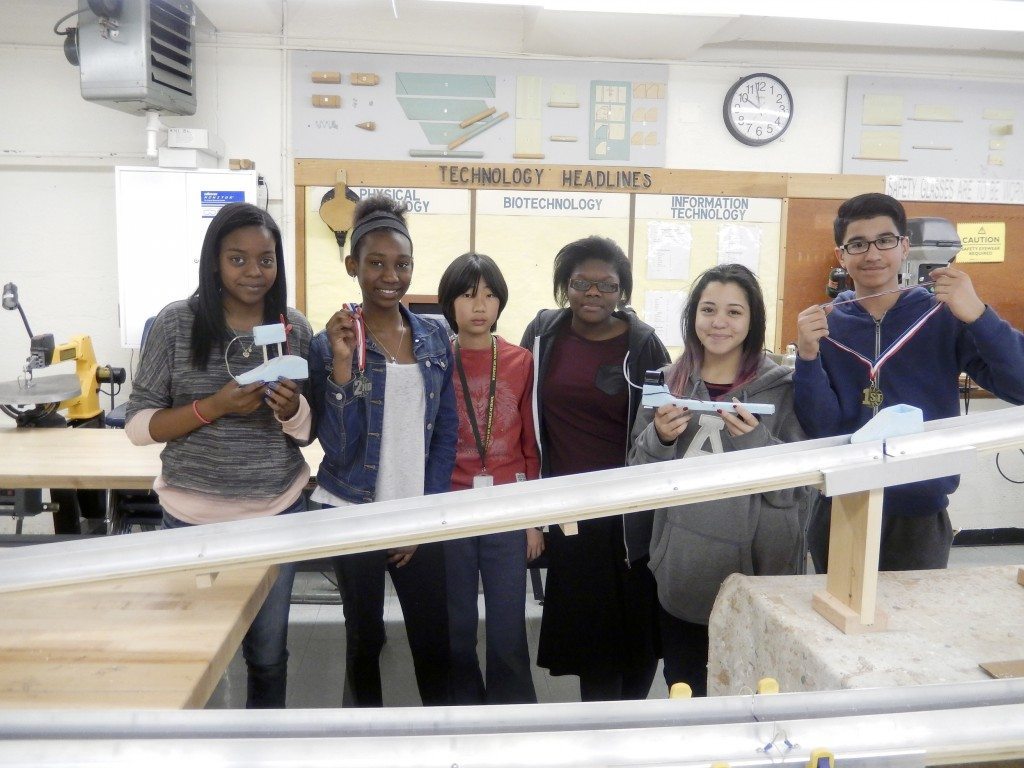 Thirteen Westbury Middle School students went to the contest, bringing with them six models. Students competed in four categories, winning first and second in the electrified category, which required students to build the fastest vehicle that uses an electrified track for power, and first place in the futuristic category, which tested students’ ability to explain their design concept.

But the victory didn’t come without a lot of hard work. Students worked for weeks before and after school, as well as during their lunch periods to perfect their designs.

Students worked in teams of two to build their vehicles, which were made primarily out of blue Styrofoam, which is dense and easy to shape. But several factors got in the way and not all cars were perfect, said eighth-grader Daniel Lee.

“We had to know where to place the propellers, and then some weren’t balanced and some didn’t work out well so we could only bring a few cars that were the best few,” said Lee.

“Sometimes the car would go, sometimes it wouldn’t. It was a lot of trial and error,” said eighth-grader Alahna Perez.
But the hours spent perfecting their models were not in vain.

“It was satisfying when we won. We realized we did all this work and it paid off. Even if we didn’t win, it was a good experience but since we won it made it that much better,” said Jade Telesford. “I feel accomplished. I came almost every day and it was fun working with your friends and we all get closer.”

The students, many of whom were eighth graders, are already thinking about next year’s competition, saying they hope they can go again next year and compete at the high school level.

“I’d be happy if we can do it next year, it was a lot of fun,” said Felicia Anacreon. “Now we know what to expect.”