Westbury resident Anthony LaMarca will be the featured artist at the Golden Gallery in the Glen Cove Senior Center this month. LaMarca is a naturally talented and award-winning artist, but his art journey didn’t begin until about 15 years ago.

LaMarca fell into painting accidentally, when he decided to take classes at the Westbury Senior Center to occupy his time and stimulate his mind after retirement. He signed up for several painting classes and discovered that he not only enjoyed painting, but also had a natural flair for expressing himself on canvas and paper. 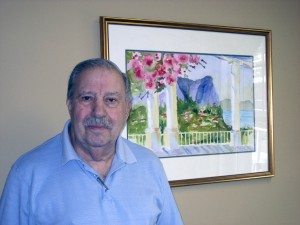 “I like the idea of being creative,” LaMarca said. “When you get a brush in your hand and some paint, you create things.”

From the Westbury Senior Center, LaMarca was referred to another art class at another senior center. Since then, he’s gone to several classes all over Nassau County and learned how to use different mediums, including oil and watercolors, which is where he concentrates his efforts now.

During any given week, LaMarca goes to five different art classes.

“It’s a release from the hum drum,” LaMarca said. “Painting is a calming influence and there’s a certain satisfaction in seeing a white piece of paper becoming something different.”

He mostly does landscapes, inspired by the places he has visited around the world. Sometimes, he will even paint a vacation spot in acrylics, only to do it again in watercolors.

LaMarca has been the past President of the Suburban Art League for the past six years and is now the 2nd Vice President and Program Chairman. He is also a member in good standing in the Art League of Nassau County, the Independent Art Society, the Floral Park Art League and the Village Art Club. He has participated in many group shows, many of which are juried exhibits, and has won numerous Awards of Merit and Honorable Mention Awards. His paintings have also been displayed at the Westbury Memorial Public Library, and some are included in several private collections.