On March 7, the Westbury United Methodist Church was awash with the clattering of tracks and the tooting of whistles as local model railroad enthusiasts set up shop to help raise money for a local Boy Scout troop. 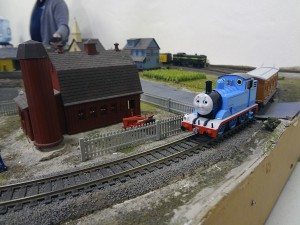 Sponsored by Westbury Boy Scout Troop 233, the indoor train show was an exhibition of miniature railroad trains and the elaborate tracks painstakingly created by the Long Island clubs running them, which drew a number of children and adults looking for something fun to do on a chilly Saturday afternoon.

Ray Muntz of Westbury, a member of the Grumman Railroad Club, has had a lifelong love of designing and running his own miniature train lines. Years ago, when his own son was a Boy Scout whose troop was in need of a fundraiser, Muntz organized the train show in order to help. Twenty-five annual shows later, the fundraiser is going as strong as ever, he said. 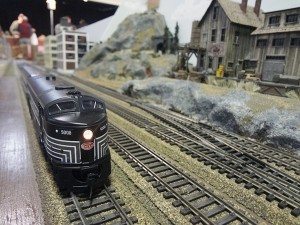 “These guys are all volunteers from different railroad clubs,” he said. “I put out the word, they come down, set everything up, and the Scouts make some money off of it. It’s a cause that we think is very important to support.”

Judging from some of the mammoth, winding tracks on display—featuring miniature models of towns, mountainside cabins, industrial areas, and bustling downtowns, all assembled by hand and accentuated with various bits of trees and greenery —you’d think that the railroad clubs must have arrived at the church a week before for set-up.

However, Muntz noted that many of the complex displays were only set up that very morning.

“All of these tracks are modular…they’re all in four-foot sections, and you just break them apart and set them back up,” he said. “Each man owns his own individual section, and when we have the shows we call them and their members show up and connect each section with screws and set up the wiring. This morning they got here and started setting up at 8 a.m., and by 9:30 everything was running.” 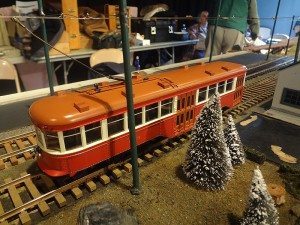 Scoutmaster Dwayne Cox said that Troop 233 will be celebrating its 73rd year of operation this year; United Methodist Church has been sponsoring the program at their location since 1942. Cox noted that the train show was one of two major fundraisers that his scouts do every year, along with a pancake breakfast held at the end of every December.

“What these gentlemen do for us is tremendously helpful,” Cox said. “It’s an opportunity for the boys to help raise money for the troop…they sell tickets to friends, family, and classmates…we get a lot of corporation from the school district and local businesses. The funds we raise today will go a big way towards allowing the boys to go to summer camp every year, as well as keeping the costs low for our boys to go to other events throughout the year, such as weekend camping trips and amusement parks.”

Kids and adults in attendance got to observe numerous model railroad set-ups in action, enjoy arts and crafts, and even chow down on hot dogs and other delicious goodies. In addition, a Metro Transit Authority police officer was present at the event, imparting railroad safety advice and information to attendees.

Richie Beilinson of Westbury and his nine year-old son Jonathan are both big train fans—both of the model variety and the real thing as well—so naturally they made a point of getting to the train show at United Methodist Church to check out the action as well as support their local scouting troop.

“Trains are Jonathan’s number-one passion,” Richie said. “We go to Pennsylvania, New Jersey, we go to all of these shows and check out the model railroads…they put such detail and effort into them, it’s astonishing. And we love to ride the big trains together as well. It’s a lot of fun.”

As for why Muntz and his fellow railroaders trudge out into the cold each and every year to continue to perpetuate this worthy event, he said, that the reasoning was, in fact, as simple as it gets.

“We just enjoy doing it,” he said. “We do it because we have fun and we enjoy helping out the Scouts in the process. It’s a very worthy cause.”