The cold could not stop the eager kids and their parents from attending the Village of Westbury’s annual egg hunt, held at the Recreation Center. Parents, volunteers and members of the Omega Psi Phi Fraternity watched as the children ran frantically around the facility’s playground, scooping and dropping eggs into their baskets. 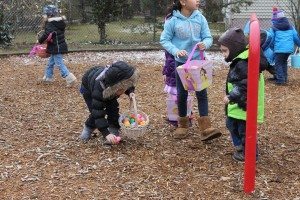 Every child’s face lit up as they scrounged the playground for eggs and candy, even through the cold weather. Inside the Recreation Center was a waiting area where parents and kids remained while other age groups went on the hunt, and were treated to hand-crafted balloon animals and toys. While the younger children had the eggs scattered around the ground, the older groups had to look for hidden eggs, which provided much more of a challenge.

Several children won prize baskets and enjoyed taking photos with the Easter Bunny after the hunt was over. 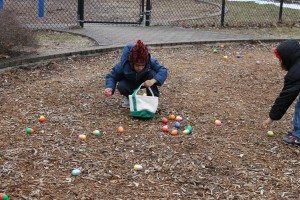 “This spring tradition has been happening for about 20 years now,” said mayor Peter Cavallaro. “It’s really a joint effort between the Rec Center and the Omega Psi Phi Fraternity. There was a member of the fraternity, Al Campbell, who helped out with this event—he’s passed since then, but his fraternity brothers have continued the tradition in his honor.”

Check out more photos from the event here