As Long Island braved yet another snowstorm last week, village and town road crews continued to work fervently to keep streets clear and safe. The Village of Westbury’s Public Works Department has been out to clean roads more than 12 times since Jan. 27.

“It’s not fun, but it hasn’t been too bad,” says Westbury’s Superintendent of Public Works Jim Corcoran. “The snow’s been coming on the weekends, which makes it a little easier because you don’t have to deal with people commuting.” 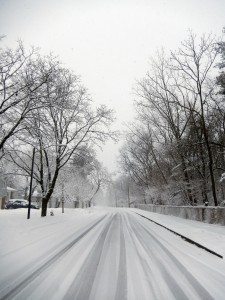 Corcoran says this year’s snowfall has been about the same as last year. And by now, the department has the snow removal system down pat. The department prepares for storms by preloading its nine trucks with salt and liquid calcium, and making sure all the trucks are fueled. A little before, or as soon as it starts snowing, the trucks go out and start salting and putting the liquid calcium down. Then they plow for however long they need to, and do it again if needed.

The village plows and cleans its 43 miles of roads, as well as the municipal lots. Village mayor Peter Cavallaro says they have plenty of salt, but will probably get more delivered.

“We’re probably slightly over budget on snow removal,” Cavallaro said. “It’s nothing to be concerned about, sometimes you use none of it, sometimes you use more. We have other areas of the budget we can transfer from.”
Cavallaro commended the public works department for their hard work in clearing the snow this season.

The Town of North Hempstead tackles snow removal in a similar way, spreading salt and sand onto roadways. Main arteries are given priority, followed by smaller streets, dead ends and cul-de-sacs. The process continues until sand and salt has been applied to all town streets or snow becomes too deep for the process to be effective. When the storm has ended trucks will continue working to widen the roadways by pushing the snow back to the curbs and clearing the intersections. Catch basins will be exposed in order to allow melting snow to drain and avoid flooding streets.

One of the biggest obstacles the public works crew faces when they’re clearing the streets is having to maneuver around cars parked on the street. If a snow emergency is declared, all cars are supposed to be off of village streets.

“We have areas where streets are fairly narrow and a lot of cars are parked there all the time,” said Corcoran. “The biggest help for us is having cars off the street.”

North Hempstead makes a similar request of its residents, asking that whenever possible, residents park all vehicles in driveways during snowstorms to prevent being plowed in.

Business owners in North Hempstead, as well as the Village of Westbury, are responsible for clearing the walkways in front of their properties. That task was made considerably easier for Post Avenue merchants this year by Joe Stasi and the Stasi Brothers Asphalt Company. For the past four years, Stasi’s company has donated time, equipment and labor to clear all the snow off of Post Avenue’s sidewalks, saving the thoroughfare from the major mounds of snow that are so commonplace elsewhere.

Village residents are responsible for shoveling their sidewalks within four to six hours of the snow stopping. Cavallaro says there is fairly decent compliance with that rule, but that sometimes they do give warnings if an area with heavy foot traffic has not been shoveled.

North Hempstead also asks that residents wait until streets have been plowed before shoveling sidewalks, and that if they can’t wait, to pile snow to the left of the driveway (facing the house) to minimize what will be plowed back. Town code states property owners or people in control of the property must clear any snow or ice within four hours of a snow.

“Each property is unique and if the resident is elderly, we work with them along with the Town’s Department of Services for the Aging,” said Carole Trottere, director of communications for the Town of North Hempstead.